The Sewing Circles of Herat: A Personal Voyage Through Afghanistan (Paperback) 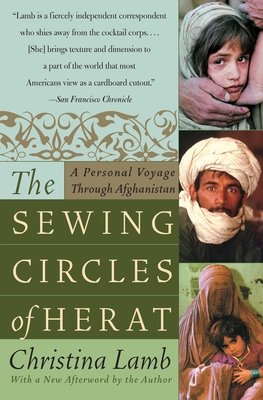 Twenty-one-year-old Christina Lamb left suburban England for Peshawar on the frontier of the Afghan war. Captivated, she spent two years tracking the final stages of the mujaheddin victory over the Soviets, as Afghan friends smuggled her in and out of their country in a variety of guises.

Returning to Afghanistan after the attacks on the World Trade Center to report for Britain's Sunday Telegraph, Lamb discovered the people no one else had written about: the abandoned victims of almost a quarter century of war. Among them, the brave women writers of Herat who risked their lives to carry on a literary tradition under the guise of sewing circles; the princess whose palace was surrounded by tanks on the eve of her wedding; the artist who painted out all the people in his works to prevent them from being destroyed by the Taliban; and Khalil Ahmed Hassani, a former Taliban torturer who admitted to breaking the spines of men and then making them stand on their heads.

Christina Lamb's evocative reporting brings to life these stories. Her unique perspective on Afghanistan and deep passion for the people she writes about make this the definitive account of the tragic plight of a proud nation.

Christina Lamb is one of the world’s leading foreign correspondents. Author of Farewell Kabul and New York Times bestseller I Am Malala, she has reported on Pakistan and Afghanistan since 1987. Educated at Oxford and Harvard, she is the author of five books and has won a number of awards, including Britain’s Foreign Correspondent of the Year five times, as well as the Prix Bayeux-Calvados, Europe’s most prestigious award for war correspondents. She currently works for the Sunday Times and lives in London and Portugal with her husband and son.