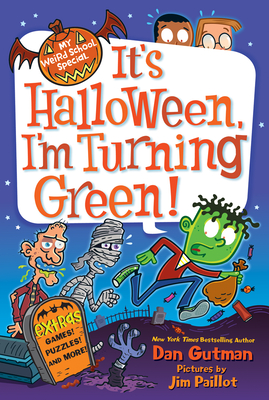 By Dan Gutman, Jim Paillot (Illustrator)
$5.99
On Our Shelves Now

With more than 29 million books sold, the My Weird School series really gets kids reading!

It’s Halloween, and you know what that means! Candy! Costumes! More candy! What would happen if a kid ate a million hundred pounds of chocolate in one night? One thing’s for sure—when the kids from Ella Mentry School go trick-or-treating, it will be a Halloween to remember.

Join A.J. and the gang from My Weird School in this special series of after-school, holiday-themed chapter books featuring hilarious stories and thirty-two pages of games, puzzles, and more.

This is one weird Halloween special you won't want to miss!