Throwback: Out of Time (Paperback) 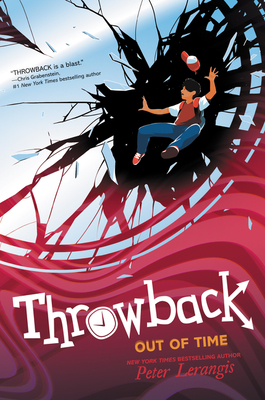 This is book number 3 in the Throwback series.

Peter Lerangis, the New York Times bestselling author of the Seven Wonders and Max Tilt series, returns with the last installment of his electrifying trilogy about a boy who discovers that he can alter the course of history.

Thirteen-year-old Corey Fletcher is the world’s first Throwback. He has the power to not only to travel back in time, but to change the past. It’s a power that comes with no small amount of responsibility—but when Corey tried fix some of history’s worst evils, he discovers that the consequences for his good deeds have changed him in ways that he never expected and ways he may not be able to fix.

Trapped in a body that’s not his own, his powers all but gone, Corey realizes his latest mission may be the hardest of all—to save himself. With the help of his best friend, Leila, and an uneasy alliance with a shadowy group that’s been watching his every move, Corey’s going to have to risk it all to find a way to fix himself without destroying the world as we know it.

Get ready for time-warping adventure with a historical twist in the last book of the Throwback trilogy from New York Times bestselling author Peter Lerangis, whose books have sold over five and a half million copies worldwide.

Peter Lerangis is the author of more than one hundred and sixty books, which have sold more than five and half million copies and been translated into thirty-three different languages. These include the five books in the New York Times bestselling Seven Wonders series, The Colossus Rises, Lost in Babylon, The Tomb of Shadows, The Curse of the King, and The Legend of the Rift, and two books in the 39 Clues series. He lives in New York City with his family.

“This is an emotional journey, full of heart, about family and wanting to change the past. It’s the kind of story that stays with you long after reading, and it will resonate with many.”
— Booklist

“With this exciting adventure, Lerangis (the Seven Wonders series) captures the diversity of New York throughout the decades….the thought-provoking concept and Corey’s own heartbreaking attempts to prevent tragedy should easily draw readers.”
— Publishers Weekly

"Corey and Leila... are likable, genuine, and brave, just the kind of kids that readers would want to join on an adventure."
— Bulletin of the Center for Children’s Books