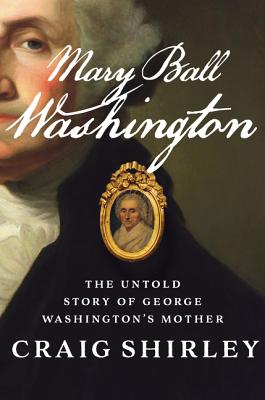 The Mother of the Father of our Country.

Mary Ball Washington was an unlikely candidate to be the mother of history’s most famous revolutionary. In fact, George Washington’s first fight for independence was from his controlling, singular mother.

Stubborn, aristocratic Mary Ball Washington was entrenched in the Old World ways of her ancestors, dismissing the American experiment even as her son led the successful rebellion against the crown. During his youth, ambitious George dove into the hard-scrabble work of a surveyor and rose through the ranks of the fledgling colonial army, even as his overprotective mother tried to discourage these efforts.

Mary’s influence on George was twofold. Though she raised her eldest son to become one of the world’s greatest leaders, Mary also tried many times to hold him back. While she passed down her strength and individuality to George, she also sought to protect him from the risks he needed to take to become a daring general and president. But it was this resistance itself which fanned the spark of George’s independence into a flame. The constant tug of war between the two throughout the early years helped define George’s character.

In Mary Ball Washington, New York Times bestselling author Craig Shirley uncovers startling details about the inner workings of the Washington family. He vividly brings to life a resilient widow who singlehandedly raised six children and ran a large farm at a time when most women’s duties were relegated to household matters. Throughout, Shirley compares and contrasts mother and son, illuminating the qualities they shared and the differences that divided them.

A significant contribution to American history, Mary Ball Washington is the definitive take on the relationship between George and Mary Washington, offering fresh insight into this extraordinary figure who would shape our nation—and the woman who shaped him.

Craig Shirley is the author of Reagan Rising, Rendezvous with Destiny, Reagan’s Revolution, Last Act and the New York Times bestseller December 1941. He is a regular commentator throughout the media and a contributor to national publications, and was hailed by the London Telegraph as “the best of the Reagan biographers.” He is the Visiting Reagan Scholar at Eureka College, Reagan’s alma mater, and lectures often at the Reagan Library and the Reagan Ranch. He and his wife, Zorine, divide their time between Ben Lomond, a three-hundred-year-old Georgian manor house in Essex County, Virginia, and Trickle Down Point on the Rappahannock River in Lancaster, Virginia. They are the parents of four children, Matthew, Andrew, Taylor, and Mitchell.

“The gifted historian Craig Shirley has written a surprising and important account of an essential figure long shrouded in the mists of time and legend: Mary Ball Washington, the woman who gave us the Father of our country.”
— Jon Meacham, Pulitzer Prize winner and number-one New York Times bestselling author of Destiny and Power, American Lion, and Thomas Jefferson

“George Washington: gentleman farmer, revered military general, first American president, Father of our country . . . and son with mother issues? Craig Shirley brings to life America’s first First Family in vivid detail, in this dazzling biography of George’s colorful—and often difficult—mother. This riveting page-turner puts you at the center of one of the greatest Colonial family dramas—and you will see Washington and the forces that made him in a whole new light.”
— Monica Crowley, New York Times bestselling author and columnist for the Washington Times

“To read this magnificent biography of America’s First Mother is to understand the founding of our great nation from a fresh vantage point. Craig Shirley is at once a first-rate historian and a spellbinding writer. Mary Ball Washington is a major contribution to Colonial and early republic scholarship. Highly recommended!”
— Douglas Brinkley, Katherine Tsanoff Brown Chair in Humanities and professor of history at Rice University, and CNN’s Presidential Historian

“Craig Shirley has delivered a long-overdue, captivating book about the exceptional mother of the Father of our country.”
— Gay Hart Gaines, former Regent of the Mount Vernon Ladies’ Association

“Written with verve, fairness and sympathetic imagination…it fills a long-standing void in our understanding of how George Washington evolved from an ambitious, largely self-educated young provincial who had trouble controlling his temper, into an inspiring, stoically self-disciplined leader of men.”
— Washington Times