On the Corner of Hope and Main: A Blessings Novel (Paperback) 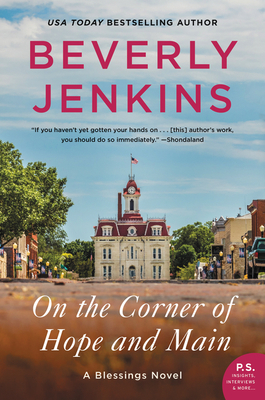 This is book number 10 in the Blessings series.

“If you haven’t yet gotten your hands on [this] author’s work, you should do so immediately.”—Shondaland

Trent July has been the mayor of this historic town for the past four years, but now he’s ready to let someone else take up the mantle. Barrett Payne, a former Marine, decides he wants the job. But when a surprise candidate also enters the ring, the town has opinions on who would be the best candidate.

And of course that’s not the only drama, as Malachi “Mal” July continues to make reparations for the damage he’s caused and to the people he’s betrayed, especially his lady love Bernadine. Is she finally ready to forgive him and let the past go?

As the residents of Henry Adams have learned, life will throw obstacles their way, but it’s how they come together and rise above these challenges that keep the bonds of their close-knit community strong.

Beverly Jenkins is the recipient of the 2018 Michigan Author Award by the Michigan Library Association, the 2017 Romance Writers of America Lifetime Achievement Award, as well as the 2016 Romantic Times Reviewers’ Choice Award for historical romance. She has been nominated for the NAACP Image Award in Literature, was featured in both the documentary Love Between the Covers and on CBS Sunday Morning. Since the publication of Night Song in 1994, she has been leading the charge for inclusive romance, and has been a constant darling of reviewers, fans, and her peers alike, garnering accolades for her work from the likes of The Wall Street Journal, People Magazine, and NPR.

To read more about Beverly, visit her at www.BeverlyJenkins.net.

"Jenkins’s characters come to vivid life, and the town is as well developed as those who live there... Henry Adams remains a place of faith where marriages deepen and relationships are mended. This is the best of the series so far."  — Publishers Weekly (starred review)

"This storytelling is uplifting and engaging and proves it really does take a village." — Al Roker on Beverly Jenkins' Blessings series