For the Good of the Game: The Inside Story of the Surprising and Dramatic Transformation of Major League Baseball (Large Print / Paperback) 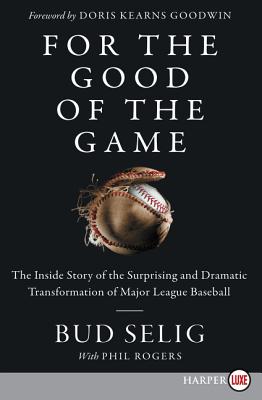 Foreword by Doris Kearns Goodwin
The longtime Commissioner of Major League Baseball provides an unprecedented look inside professional baseball today, focusing on how he helped bring the game into the modern age and revealing his interactions with players, managers, fellow owners, and fans nationwide.

More than a century old, the game of baseball is resistant to change—owners, managers, players, and fans all hate it. Yet, now more than ever, baseball needs to evolve—to compete with other professional sports, stay relevant, and remain America’s Pastime it must adapt. Perhaps no one knows this better than Bud Selig who, as the head of MLB for more than twenty years, ushered in some of the most important, and controversial, changes in the game’s history—modernizing a sport that had remained unchanged since the 1960s.

In this enlightening and surprising book, Selig goes inside the most difficult decisions and moments of his career, looking at how he worked to balance baseball’s storied history with the pressures of the twenty-first century to ensure its future. Part baseball story, part business saga, and part memoir, For the Good of the Game chronicles Selig’s career, takes fans inside locker rooms and board rooms, and offers an intimate, fascinating account of the frequently messy process involved in transforming an American institution. Featuring an all-star lineup of the biggest names from the last forty years of baseball, Selig recalls the vital games, private moments, and tense conversations he’s shared with Hall of Fame players and managers and the contentious calls he’s made. He also speaks candidly about hot-button issues the steroid scandal that threatened to destroy the game, telling his side of the story in full and for the first time.

As he looks back and forward, Selig outlines the stakes for baseball’s continued transformation—and why the changes he helped usher in must only be the beginning.

Illustrated with sixteen pages of photographs.

Bud Selig was the ninth commissioner of baseball. A lifelong baseball fan and long-term baseball executive, he's known for his numerous contributions to America's Pastime, including reform of drug testing policies and labor relations, and has been tenured for more than two decades. He lives with his wife, Sue, and they have three daughters.

“Entertaining and important, For the Good of the Game is filled with details and up-close insights into the business, the competition, and the innovation challenges and successes of Major League Baseball, offering a depth of understanding that fans rarely get.”
— - Tony La Russa

“Bud Selig’s career in baseball demonstrates the power of persistence. From the highest levels of our great game, he has always remained a loyal fan first. Bud’s insights on a life in our National Pastime are unlike any other.”
— —Hall of Famer JOE TORRE, MLB’s chief baseball officer and four-time world champion manager of the New York Yankees

&#8220Bud and I have been the best of friends for more than sixty years. I am so proud of Bud for writing the book. It shows why he is in the Baseball Hall of Fame.”
— - Hank Aaron

“I’ve never met an owner, or a commissioner, who loves the game, and cares for it, more than Bud Selig. In this book he reveals how he modernized baseball’s economics and repaired the game when steroids threatened it, with fascinating details and admirable perspective.”
— - Tim Kurkjian, ESPN baseball analyst

“This in-the-trenches memoir provides us with Bud’s full take on the controversies, regrets, and many significant achievements that marked the tenure of one of sports most consequential commissioners.”
— - Bob Costas