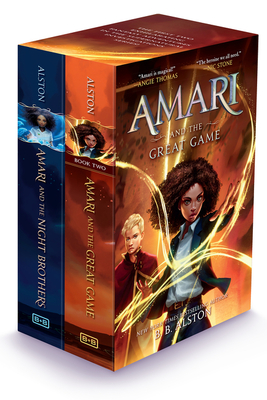 The hardcover box set of the blockbuster New York Times bestseller Amari and the Night Brothers and its sequel, Amari and the Great Game—two exhilarating fantasy novels, perfect for fans of Percy Jackson and Artemis Fowl.

AMARI AND THE NIGHT BROTHERS:

Amari Peters has never stopped believing her missing brother, Quinton, is alive. So when she discovers a ticking briefcase in his closet containing a nomination for a tryout at the Bureau of Supernatural Affairs, she’s certain the secretive organization holds the key to locating Quinton—if only she can wrap her head around the idea of magicians, fairies, aliens, and other supernatural creatures all being real.

Now she must compete for a spot against kids who’ve known about magic their whole lives. No matter how hard she tries, Amari can’t seem to escape their scrutiny and doubt—especially when her own supernaturally enhanced talent is deemed “illegal.” With an evil magician threatening the supernatural world, and her own classmates thinking she’s an enemy, Amari has never felt more alone. But if she doesn’t pass the tryouts, she may never find out what happened to Quinton.

AMARI AND THE GREAT GAME:

After finding her brother and saving the entire supernatural world, Amari is convinced her first full summer as a Junior Agent will be a breeze. But between the new Head Minister’s strict anti-magician agenda, fierce Junior Agent rivalries, and her brother Quinton’s curse worsening, Amari’s plate is full. So when the secretive League of Magicians offers her a chance to stand up for magiciankind as its new leader, she declines. She’s got enough to worry about!

But her refusal allows someone else to step forward, a magician with dangerous plans for the League. This challenge sparks the start of the Great Game, a competition to decide who will determine the future of magiciankind. The Great Game is both mysterious and deadly, but among the winner’s magical rewards is Quinton’s last hope—so how can Amari refuse?

B. B. Alston lives in Lexington, South Carolina. His debut novel, Amari and the Night Brothers, is a #1 Kids’ Indie Next pick and the winner of Barnes & Noble’s inaugural Children’s and YA Book Award as well as a New York Times and indie bestseller. When not writing, he can be found eating too many sweets and exploring country roads to see where they lead. Visit him online at www.bbalston.com.