In the Year of the Boar and Jackie Robinson (Paperback) 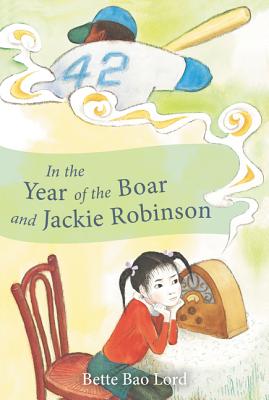 A timeless classic that will enchant readers who love Jennifer L. Holm and Thanhhà Lại, about an immigrant girl inspired by the sport she loves to find her own home team—and to break down any barriers that stand in her way.

Shirley Temple Wong sails from China to America with a heart full of dreams. Her new home is Brooklyn, New York. America is indeed a land full of wonders, but Shirley doesn't know any English, so it's hard to make friends.

With her hero smashing assumptions and records on the ball field, Shirley begins to feel that America is truly the land of opportunity—and perhaps has also become her real home.

Bette Bao Lord based her acclaimed middle grade novel In the Year of the Boar and Jackie Robinson largely on the days when she herself was a newcomer to the United States. She is also the author of Spring Moon, nominated for the American Book Award for First Novel, and Eighth Moon.

Marc Simont was born in 1915 in Paris. His parents were from the Catalonia region of Spain, and his childhood was spent in France, Spain, and the United States. Encouraged by his father, Joseph Simont, an artist and staff illustrator for the magazine L'Illustration, Marc Simont drew from a young age. Though he later attended art school in Paris and New York, he considers his father to have been his greatest teacher.

When he was nineteen, Mr. Simont settled in America permanently, determined to support himself as an artist. His first illustrations for a children's book appeared in 1939. Since then, Mr. Simont has illustrated nearly a hundred books, working with authors as diverse as Margaret Wise Brown and James Thurber. He won a Caldecott Honor in 1950 for illustrating Ruth Krauss's The Happy Day, and in in 1957 he was awarded the Caldecott Medal for his pictures in A Tree is Nice, by Janice May Udry.

Internationally acclaimed for its grace, humor, and beauty, Marc Simont's art is in collections as far afield at the Kijo Picture Book Museum in Japan, but the honor he holds most dear is having been chosen as the 1997 Illustrator of the Year in his native Catalonia. Mr. Simont and his wife have one grown son, two dogs and a cat. They live in West Cornwall, Connecticut. Marc Simont's most recent book is The Stray Dog.

“This poignant but often outrageously humorous story shows a child’s problems of adjusting to a new country and coming out on top. [The book] is in a league by itself—and Shirley Temple Wong is a winner all the way.” — School Library Journal