Saying it Out Loud (Mass Market) 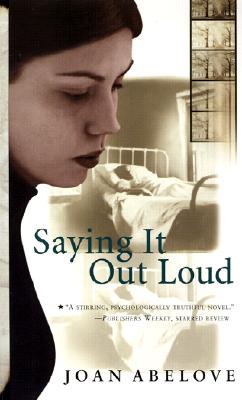 By Joan Abelove
$5.99
Not available

For fans of Lurlene McDaniel, this is a heartwrenching chronicle of a teen girl's experiences with her mother's brain cancer, based on the author's own life

Mindy has always relied upon her mother-to listen to her, to ease the tension between Mindy and her withdrawn father, to love her. Then her mother is diagnosed with a brain tumor. After her surgery, she is no longer a laughing, lively presence. She has lost the power of speech, and her memory-and Mindy has lost her mother forever. Based upon Joan Abelove's own life, here is the wrenching story of a girl losing her mother early, a girl with a father who will not acknowledge what is going on-a girl who could have been you, or someone you know.

oan Abelove is an American writer of young adult novels. She attended Barnard College and has a Ph.D in cultural anthropology from the City University of New York. She spent two years in the jungles of Peru as part of her doctoral research and used the experience as background for her first novel, Go and Come Back (1998). Go and Come Back earned numerous awards and citations, including a "Best Books for Young Adults" selection of the American Library Association and "Book Prize Finalist" selection of the Los Angeles Times. she also wrote Saying it Out Loud. She is also in a critique group with Gail Carson Levine, writer of "Ella Enchanted" and "Writing Magic", a guide for child authors who wish to make their stories better. Joan Abelove now lives in New York city with her husband and son.

* "Abelove lifts Mindy's feelings of isolation and grief to a metaphoric level, making it a story about leaving childhood behind,"--Publishers Weekly, starred review


"This brief but powerful novel relates Mindy's thoughts and feelings during the very painful month preceding her mother's death. Through journal entries, narration, and flashbacks, the 16-year-old relates the course of her mother's illness from the numbing diagnosis of "brain tumor" to her eventual demise. . . . A beautifully written and tender portrayal of one young woman coming to grips with loss."--School Library Journal

"Complex but also vibrant and infused with tenderness."--Booklist

"Abelove moves from the exotic rain forest of her debut, Go and Come Back (1998), to more familiar suburban territory for this anguish-ridden tale of a teenager whose mother is terminally ill."--Kirkus Reviews