America Is in the Heart (Penguin Vitae) (Hardcover) 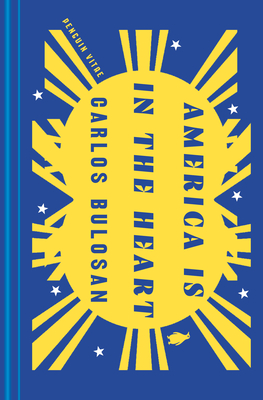 Poet, essayist, novelist, fiction writer and labor organizer, Carlos Bulosan (1911-1956) wrote one of the most influential working class literary classics about the U.S. pre-World War II, a period and setting similar to that of Steinbeck's The Grapes of Wrath and Cannery Row. Bulosan's semi-autobiographical novel America is in the Heart begins with the narrator's rural childhood in the Philippines and the struggles of land-poor peasant families affected by US imperialism after the Spanish American War of the late 1890s. Carlos's experiences with other Filipino migrant laborers, who endured intense racial abuse in the fields, orchards, towns, cities and canneries of California and the Pacific Northwest in the 1930s, reexamine the ideals of the American dream. Bulosan was one of the most important 20th century social critics with his deeply moving account of what it was like to be criminalized in the U.S. as a Filipino migrant drawn to the ideals of what America symbolized and committed to social justice for all marginalized groups.

Carlos Bulosan (1911-1956), born in Binalonan, Pangasinan, under U.S. colonial occupation of the Philippines, arrived in the U.S. at the start of the Great Depression as part of a generation of Filipino migrant workers. From 1930 to 1956, Bulosan developed into a leading Filipino writer in the U.S. committed to social justice. Bulosan is a pioneering and iconic figure of Filipino American literature and Filipino American labor history. Elaine Castillo is a graduate of the University of California, Berkeley. America Is Not the Heart is her first novel, and was long-listed for the Center for Fiction First Novel Prize. E. San Juan, Jr. is an internationally renowned literary and cultural critic, and was chair of the Department of Comparative American Cultures, Washington State University. Jeffrey Arellano Cabusao is an associate professor in the Department of English and Cultural Studies at Bryant University.