Joseph Smith for President: The Prophet, the Assassins, and the Fight for American Religious Freedom (Hardcover) 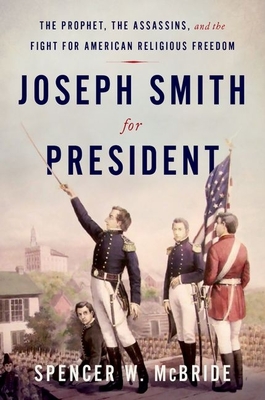 By the election year of 1844, Joseph Smith, the controversial founder of the Church of Jesus Christ of Latter-day Saints, had amassed a national following of some 25,000 believers. Nearly half of that population lived in the city of Nauvoo, Illinois, where Smith was the mayor and the commander-in-chief of a militia of some 2,500 men. In less than twenty years, Joseph Smith had transformed the American religious landscape and grown his own political power substantially. Still, the political standing of the Mormon people remained unstable. Unable to garner federal protection or the support of President Martin Van Buren or any of the major presidential candidates, Smith took the bold step of launching his own presidential campaign. While many scoffed at the notion that Smith could come anywhere close to the White House, others regarded his run as a threat to the stability of the young nation. Hounded by mobs throughout the campaign, Smith was ultimately killed, becoming the first presidential candidate to be assassinated. Though Joseph Smith's run for president is now best remembered for its gruesome end, the renegade campaign was historic in the proposals it put forward. He called for a total abolition of slavery, the closure of the country's penitentiaries, and the reestablishment of a national bank to stabilize the economy. But most important was Smith's call for an expansion of protections for religious minorities. In a time when the Bill of Rights did not apply to individual states, Smith called for the federal government to be empowered to protect minorities when states failed to do so. In this book, Spencer W. McBride tells the story of Smith's campaign and how his calls for religious freedom through constitutional reform are essential to understanding how the American political system evolved to what we know today.