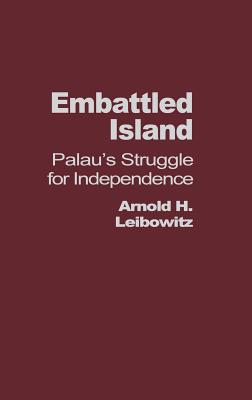 Palau was the last trusteeship, not only of the United States but the last trusteeship in the world. For 25 years the United States tried to negotiate an agreement--a compact--with Palau. Under this compact, Palau would gain its independence as a Freely Associated State and a large amount of money, $500 million; while the U.S. obtained certain military base rights and passage of nuclear power ships and submarines. The compact took on enormous symbolic importance throughout the world because of a provision in the Palau Constitution that Palau could not grant the U.S. nuclear rights without the approval of 75% of the people of Palau. A number of groups fought against ratification of the compact by Palau. They viewed Palau as the symbol of a nuclear free Pacific and the hope for an environmental preserve against great power imperialism and military intrusion in the Pacific.

Three Congressional committees with different views toward the compact engaged the ratification issue. In Palau, the Executive and Palauan Congress were equally divided. President Remeliik, the first elected President in Palau, was assassinated. Lazarus Salii, the second elected President, committed suicide. Why these events occurred and how they linked to compact ratification is part of the story of this book. The book moves between the U.S.-Washington scene and the local Palau scene. The end of the book discusses the reasons for Salii's suicide and discloses who killed President Remeliik. The book ends with the 50th Anniversary Commemoration of the Battle of Peleliu, the final ratification of the Compact of Free Association, and the description of the Independence Day ceremonies in Palau.

ARNOLD H. LEIBOWITZ has written extensively about the territories, Commonwealths, and Freely Associated States of the United States, and has represented almost all of them before the Federal government since 1964 when he was General Counsel of the U.S. Commission of the Status of Puerto Rico. His book, Defining Status: A Comprehensive Analysis of U.S. Territorial Relations, is the leading reference work in the field, having been cited by the U.S. Supreme Court and a number of lower courts. He represented the Trusteeship of Palau from 1986-1988.