The Lion of Lark-Hayes Manor (Hardcover) 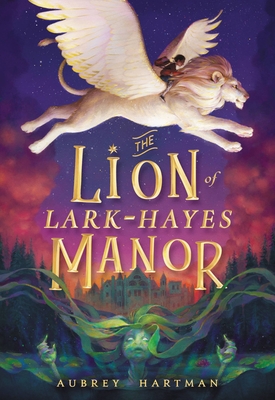 A charming middle-grade novel about old magic, new adventures, a winged lion learning to roar, and a young girl fighting to be heard. Perfect for fans of classics like The NeverEnding Story.

Poppy Woodlock believes in magic, but so far, she hasn’t found any. It’s been two weeks since her parents moved their family to Oregon to undertake their biggest project yet: revitalizing the once-grand Lark-Hayes Manor. Her older brother instantly found his place, but after being thrown into middle school midyear, Poppy is feeling…invisible. So she retreats to where she’s always felt most at home: books and magic. And if the fantastic and supernatural exist, certainly they can be found in this mysterious old estate.

A late-night prowl leads Poppy to a desperate water nymph, with whom she strikes a dangerous bargain. In exchange for the thing she loves most—her favorite book— Poppy now has the secret of a lifetime: her very own flying lion. Sampson is exactly what she needs to prove magic does exist and, more importantly, that she is not to be so easily dismissed.

But the cost of ancient magic is astronomic. With every night Sampson grows, another book disappears, and Poppy soon faces the harrowing reality that without their favorite stories, the lives of everyone around her begin to unravel.

Fixing the chaos will require Poppy to be clever and bold, and even at her smartest and loudest, she’s not sure it will be enough. But she has to try.

Aubrey Hartman lives in California with her husband and three young children. Like Poppy, she believes in magic: the kind that’s made up of powerful words, cinematic scenes, and characters who curl up in your heart to stay. Also like Poppy, she’s passionate about inspiring young people to recognize the impact their voices can have in the world. The Lion of Lark-Hayes Manor is her debut novel.