Where the Mountain Meets the Moon Gift Set (Paperback) 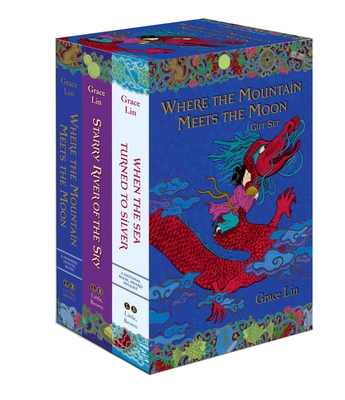 “In the poor village of Fruitless Mountain -- where there is always lots of work to do and little food or time to rest -- a young girl named Minli decides to set off on a journey to find a way to improve her family's plight. Lin's story takes you on a magical adventure with a vivid setting and wondrous characters.”
— Lisa Fabiano, Wellesley Booksmith, Wellesley, MA

Minli's father regales her with old folktales of the Jade Dragon and the Old Man in the Moon, Minli's mother chides him for filling her head with stories. But inspired by these stories, Minli spends one of her precious copper pennies on a beautiful goldfish, which is said to be able to change the fortune of the owner. It pays off when the goldfish offers to show her the path to fortune and wealth! Minli is joined by a dragon who can't fly, and together they set out to find the Old Man of the Moon who can fulfill their dreams....

Starry River of the Sky

The moon is missing from the remote Village of Clear Sky, but only Rendi seems to notice! He can't help but notice the village's peculiar inhabitants and their problems. But one day, a mysterious lady arrives with the gift of storytelling, and slowly transforms the villagers and Rendi himself....

When the Sea Turned to Silver

Peace is shattered one night when soldiers of the Emperor arrive and kidnap Pinmei's grandmother. Everyone knows the Emperor wants the Luminous Stone That Lights the Night. Determined to have her grandmother returned, Pinmei embarks on a journey to find the Stone alongside her friend Yishan. Together, the two must save Pinmei's grandmother--before it's too late....

Grace Lin is the award-winning and bestselling author and illustrator of Starry River of the Sky, Where the Mountain Meets the Moon, When the Sea Turned to Silver, The Year of the Dog, The Year of the Rat, Dumpling Days, and the Ling & Ting series, as well as picture books such as The Ugly Vegetables, Dim Sum for Everyone!, and A Big Mooncake for Little Star. Grace is a graduate of the Rhode Island School of Design and lives in Massachusetts. Her website is gracelin.com.

*"On its own, this third volume contains a richly complex adventure story that revisits previous themes.... The three books together, however, offer one grand epic that spans generations.... Lin's stonecutter claims that storytellers 'can make time disappear...bring us to places we have never dreamed of...feel sorrow and joy and peace'; the description is a fitting one for author-illustrator Lin herself, who has proven herself a master."
—The Horn Book, starred review

*"The meticulous craft delivers what Lin's fans have come to expect.... This beautifully told companion to Where the Mountain Meets the Moon (2009) and Starry River of the Sky (2012) offers lyrical storytelling, bringing 'us to places we have never dreamed of.'"
—Kirkus, starred review

*"Lin's evocative language sweeps readers away, and the stories within the story are juicy and delicious....[A] worthy companion to her Newbery Honor book Where the Mountain Meets the Moon (2009) and Starry River of the Sky (2012)."
—Booklist, starred review

"Pinmei's journey has a compelling urgency that quickens the pace and enlivens the adventure, while the short stories are smoothly integrated and provide sly, subtle connections to plot events, making satisfying the climactic scene in which the elements converge.... Lin's characteristic elegant prose...keeps its enchanting, luminous quality."—BCCB

"In this captivating tale... readers will not only enjoy the 'frame' story revolving around Pinmei and Yishan, but will also like (and recognize) some of the other stories being told."—School Library Connection

* "The lively mixture of adventure, mystery, and fantasy, supported by compelling character development and spellbinding language, will captivate a wide swath of readers."—Publishers Weekly, starred review