How the One-Armed Sister Sweeps Her House: A Novel (Hardcover) 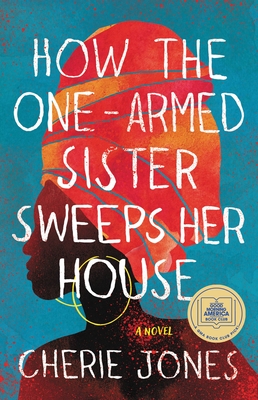 In the tradition of Zadie Smith and Marlon James, a brilliant Caribbean writer delivers a powerful story about four people each desperate to escape their legacy of violence in a so-called "paradise."

In Baxter’s Beach, Barbados, Lala’s grandmother Wilma tells the story of the one-armed sister. It’s a cautionary tale, about what happens to girls who disobey their mothers and go into the Baxter’s Tunnels. When she’s grown, Lala lives on the beach with her husband, Adan, a petty criminal with endless charisma whose thwarted burglary of one of the beach mansions sets off a chain of events with terrible consequences. A gunshot no one was meant to witness. A new mother whose baby is found lifeless on the beach. A woman torn between two worlds and incapacitated by grief. And two men driven into the Tunnels by desperation and greed who attempt a crime that will risk their freedom – and their lives.

How the One-Armed Sister Sweeps Her House is an intimate and visceral portrayal of interconnected lives, across race and class, in a rapidly changing resort town, told by an astonishing new author of literary fiction.

Cherie S.A. Jones was born in 1974. She received a LL.B degree from the University of the West Indies, Barbados, in 1995, a Legal Education Certificate from the Hugh Wooding Law School, St. Augustine, Trinidad in 1997 and was admitted to the Bar in Barbados in October 1997. Cherie won the Commonwealth Short Story Prize in 1999. She won both the Archie Markham Award and the A.M. Heath Prize at Sheffield Hallam in the UK. A collection of interconnected stories set in a different small community in Barbados won a third prize at the Frank Collymore Endowment Awards in 2016.  She still works as a lawyer, in addition to her writing.

"About a group of disparate characters in Barbados, all drawn together by a murder. The island may appear, at first glance, to be a near-paradise, but Jones’s forensic prose reveals a society riven by hardship, betrayal and inequality. It is a novel of great elegance and verve — hard to believe it’s a debut."—Maggie O’Farrell, author of Hamnet

“This book is heavy. And yet through debut novelist Cherie Jones’ poetic sensibility, it radiates a kind of breathtaking light, too . . . tough if luminous . . . through playful prose [she] invites the reader in. She never lets us lose sight of the heart—beating, wounded, alive—of tragic heroes.”—David Canfield, Entertainment Weekly

“Dazzling . . . in Jones’s capable hands, tension builds without diversion. The storytelling is far from breathless, but it will leave you that way: The effect is of a horrific opera in which ugliness is inevitable, but no less gutting when it appears. And in this opera, there are no minor characters. Each one, carefully and vividly crafted, has a crucial part to play.” —Deesha Philyaw, New York Times Book Review

“Stunning . . . The novel pulses with brutality and runs high with emotions, offering a searing and unforgettable portrait of generational trauma, a colonialist past, and a capitalist present."—Refinery 29

“This transporting novel set in Barbados reveals the way even the most disparate lives are interconnected. It delves into wealth and class, love and crime — and the emotional turmoil that roils in a rapidly gentrifying area and the people who live there.”—Good Housekeeping

"The novel’s a stunner . . . Jones’s evocation of Barbados is exquisite, her brushwork assured, as she portrays pink sands and gated villas, decrepit hospitals and 24-hour convenience stores. . . . Jones’s prose is supple, often luxuriant, but the structure of her novel is even more impressive as she bobs and weaves through the aftermath of two mysterious crimes. The pieces snap together, one by one, exposing the consequences of dreams deferred. Here’s the launch of a stellar literary career."—Hamilton Cain, Washington Post

“Harrowing . . . A compelling […] story of lives defined by trauma generation after generation.”—Kirkus Reviews

“Intense . . . Rich characters and pulsing backstories add a great deal of flavor to the drama. Jones is off to a strong start.”—Publishers Weekly

“The haves and have-nots clash in Jones’s searing debut. In affluent Baxter Beach, the gentry of Barbados maneuver around their servants with velvet gloves and steel nerves, exposing fault lines of resentment, love as ephemeral as a tropical breeze.”—O Magazine

“A hard-hitting and unflinching novel from a bold new writer who tackles head-on the brutal extremes of patriarchal abuse.”—Bernardine Evaristo, author of Girl, Woman, Other

“This book unfolds around the reader like ripples in water, it offers an unflinching vision of what it means to have a body and to fight to protect that body, it demands attention. These are characters voices I will be hearing for a long time and a book I will be recommending to everyone.”—Daisy Johnson, author of Sisters

“Cherie Jones’ How the One-Armed Sister Sweeps Her House is an intricately plotted allegory that explores the consequences of believing that you know better than the women who made you and charts the inheritance of trauma that is all too common in Caribbean women's lives. With rare compassion and deft storytelling, Jones renders a narrative that is haunting and unforgettable.”—Naomi Jackson, author of The Star Side of Bird Hill

“A gripping thriller, a symphony of voices, and a novel of deep empathy.”—Mark Haddon, author of The Curious Incident of the Dog in the Night-Time

“Here is a bright new star. Cherie Jones has talent abounding, drawing us with skill, delicacy and glorious style into a vortex of Bajan lives on the edge, clashing across class and color divides. This is one of the strongest, most assured and heart-wrenching debuts I have ever read.”—Diana Evans, author of Ordinary People and winner of the Orange Award for New Writers

"How the One-Armed Sister Sweeps Her House is simply brilliant. By the first chapter, it burned into my heart. Ambitious, poetic, and layered with the rich voices of its many stunning characters, this terrific debut novel by Cherie Jones opened my eyes to the many ways that her young Barbadian protagonist must fight for her life."—Lawrence Hill, author of The Illegal and The Book of Negroes

“Cherie Jones's novel examines the calamities that occur when need and greed collide. Married couple Lala and Adan live on the beach in Barbados, and Adan has a plan: He's going to rob one of the Baxter Beach mansions. But when it all goes terribly wrong, everyone must reckon with the realities of the resort town they call home.”—Elle.com

“Welcome to Barbados, where wealth, class, love, crime and the lives of four characters merge in this seemingly picture-perfect paradise.”—Parade Magazine

"A plot driven by page-turning crime is balanced with subtle character studies . . . just as thrilling as it is poignant."—Marie Claire

“It's a book of many things: of the limits of romantic and familial love; of intergenerational legacy, certainly; but more than anything else it is a book about the devastating reach of patriarchy on the most vulnerable members of society. . . . if you are looking for a story that explores power, bondage and freedom in the context of a small Caribbean community, How the One-Armed Sister Sweeps Her House has many revelations.”—Minneapolis Star-Tribune

“Swap out SPF for this haunting novel….The women’s lives cross and the fallout gives a devastating new meaning to pink sands and paradise.”—The Skimm