The Memory of Blood: A Peculiar Crimes Unit Mystery (Paperback) 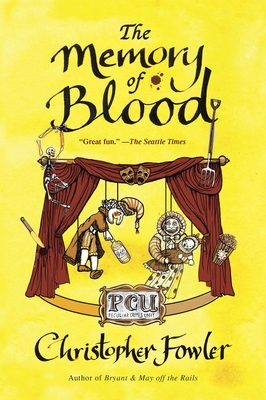 This is book number 9 in the Peculiar Crimes Unit series.

Christopher Fowler’s acclaimed Peculiar Crimes Unit novels crackle with sly wit, lively suspense, and twists as chilling as London’s fog. Now the indomitable duo of Arthur Bryant and John May, along with the rest of their quirky team, return to solve a confounding case with dark ties to the British theater and a killer who may mean curtains for all involved.

For the crew of the New Strand Theatre, the play The Two Murderers seems less performance than prophecy when a cast party ends in the shocking death of the theater owner’s son. The crime scene is most unusual, even for Bryant and May. In a locked bedroom without any trace of fingerprints or blood, the only sign of disturbance is a gruesome life-size puppet of Mr. Punch laying on the floor. Everyone at the party is a suspect, including the corrupt producer, the rakish male lead, the dour set designer, and the assistant stage manager, who is the wild daughter of a prominent government official.

It’s this last fact that threatens the Peculiar Crimes Unit’s investigation, as the government’s Home Office, wary of the team’s eccentric methods, seeks to throw them off the case. But the nimble minds of Bryant and May are not so easily deterred. Delving into the history of the London theater and the disturbing origins of Punch and Judy, the detectives race to find the maniacal killer before he reaches his even deadlier final act.

Whip-smart and endlessly entertaining, The Memory of Blood is an ingeniously intricate mystery from the deliciously inventive Christopher Fowler.

Praise for The Memory of Blood

“[The Memory of Blood] breathes new life into the locked-room mystery. . . . Spiced with a little screwball-comedy dialogue and a touch of the occult.”—The Washington Post

Christopher Fowler is the acclaimed author of the award-winning Full Dark House and nine other Peculiar Crimes Unit mysteries: The Water Room, Seventy-Seven Clocks, Ten Second Staircase, White Corridor, The Victoria Vanishes, Bryant & May on the Loose, Bryant & May off the Rails, The Memory of Blood, and The Invisible Code. He lives in London, where he is at work on his next Peculiar Crimes Unit novel.

“[The Memory of Blood] breathes new life into the locked-room mystery. . . . spiced with a little screwball-comedy dialogue and a touch of the occult.”—The Washington Post

Praise for the ingenious novels featuring the Peculiar Crimes Unit

“Bryant and May are hilarious. Grumpy Old Men does CSI with a twist of Dickens!”—New York Times bestselling author Karen Marie Moning

“One of the most delightful series around.”—Library Journal