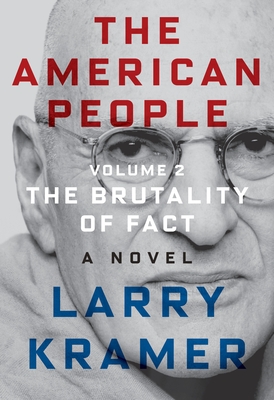 This is book number 2 in the The American People Series series.

In The American People: Volume 2: The Brutality of Fact, Larry Kramer completes his radical reimagining of his country’s history. Ranging from the brothels of 1950s Washington, D.C., to the activism of the 1980s and beyond, Kramer offers an elaborate phantasmagoria of bigoted conspiracists in the halls of power and ordinary individuals suffering their consequences. With wit and bite, Kramer explores (among other things) the sex lives of every recent president; the complicated behavior of America’s two greatest spies, J. Edgar Hoover and James Jesus Angleton; the rise of Sexopolis, the country’s favorite magazine; and the genocidal activities of every branch of our health-care and drug-delivery systems.

The American People: Volume 2 is narrated by (among others) the writer Fred Lemish and his two friends—Dr. Daniel Jerusalem, who works for America’s preeminent health-care institution, and his twin brother, David Jerusalem, a survivor of a Nazi concentration camp who was abused by many powerful men. Together they track a terrible plague that intensifies as the government ignores it and depict the bold and imaginative activists who set out to shock the nation’s conscience. In Kramer’s telling, the United States is dedicated to the proposition that very few men are created equal, and those who love other men may be destined for death. Here is a historical novel like no other—satiric and impassioned and driven by an uncompromising moral and literary vision.

Larry Kramer (1935-2020) was an award-winning playwright and author, and a celebrated public health and gay rights advocate. He wrote the critically-acclaimed, Tony Award-winning play The Normal Heart (and subsequent Emmy Award-winning HBO television adaptation), the Academy Award–nominated screenplay adaptation of D. H. Lawrence’s Women in Love, the bestselling novel Faggots, and the satirical two-volume novel The American People (Search for My Heart and The Brutality of Fact).

A pioneering AIDS activist, he cofounded the Gay Men’s Health Crisis in 1982 and founded ACT UP in 1987. Kramer won numerous awards for his plays and received the 2013 PEN/Laura Pels International Foundation for Theater Award for a Master American Dramatist.

"A river of blood courses through Kramer's epic. That blood is bought and sold and swapped and spilled. If both volumes of The American People were the only books left behind by our species, an alien people who discovered them would, at the very least, really know that we had been here . . . beautiful and humane." —Dwight Garner, The New York Times Book Review

"The American People . . . takes your breath away. There are few novels like it in our literature—not only in terms of scope but also in its crazed stagger between pathos and camp, realism and absurdism, plain lyricism and obscenity." —Jeremy Lybarger, The Nation

"A queer epic of love and death . . . The second volume of Kramer’s magnum opus summons times and voices from the depths of America’s plague years. A tale of persistence, disease, and love, it deserves to be reckoned with on Kramer’s own terms." —Cathy Corman, The Provincetown Independent

"This is the greatest, most alarming, most insane AIDS novel anybody is ever going to write or want to write . . . There’s also Larry Kramer himself, fiercely present on virtually every page of the book, reminding readers that he’s been yelling at them for half a century . . . The book is a whiteout blizzard of anger, outrage, showboating, and satire, a dark epic just crying out for a long review by the late John Leonard." —Steve Donoghue, Open Letters Review

"An acerbic, brilliant history of the age of AIDS . . . A flawless exercise in black humor, it is also filled with righteous anger—and, as each page indicates, not without good reason. Idiosyncratic, controversial, and eminently readable: a masterwork of alternative history." —Kirkus Reviews (starred review)