Everyone's an Author with 2016 MLA Update: with Readings (Paperback) 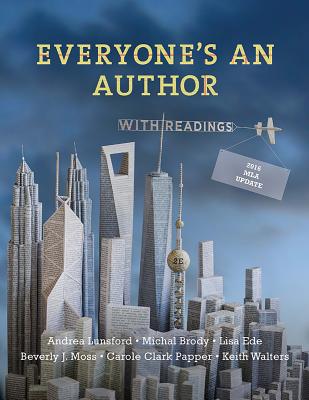 THIS TITLE HAS BEEN UPDATED TO REFLECT THE 2016 MLA UPDATE.

A rhetoric that bridges the gap between the writing students already do in social media and other nonacademic contexts and the writing they’re expected to do in college—all within a strong rhetorical framework.

Built on the keystones of rhetoric, Everyone’s an Author provides a strong foundation for authoring in the digital age: in college essays, but also on Twitter; in print, but also online; with words, but also with sound, video, and images. It shows students that the rhetorical skills they already use in social media, in their home and religious communities, at work and in other nonacademic contexts are the same ones they’ll need to succeed in college. Examples and readings drawn from across multiple media and dealing with topics that matter to students today make this a book that everyone who takes first-year writing will relate to.

Andrea Lunsford is Emerita Professor of English at Stanford University and is on the faculty at the Bread Loaf School of English. Her scholarly interests include contemporary rhetorical theory, women and the history of rhetoric, collaboration, style, and technologies of writing. She’s received the Braddock and Shaughnessy Awards, and in 1994 she received the CCCC Exemplar Award. She is currently at work on The Norton Anthology of Rhetoric and Writing.

Michal Brody is a linguist, independent scholar, and lecturer. She was a founding faculty member of the Universidad de Oriente in Yucatán, Mexico. Her scholarly work centers on language pedagogy and politics in the United States and Mexico. She’s the author (with Keith Walters) of What’s Language Got to Do with It? and coauthor (with Richard Bullock and Francine Weinberg) of The Little Seagull Handbook, and the editor of the Everyone’s an Author Tumblr site and They Say / I Blog.

Lisa Ede is Emerita Professor of English at Oregon State University, where she directed the Center for Writing and Learning and taught courses in composition, rhetoric, and literacy studies. She’s received the Braddock and Shaughnessy Awards for her research on audience and classical rhetoric. Her recent books include Situating Composition: Composition Studies and the Politics of Location and (with Andrea Lunsford) Writing Together: Essays on Collaboration in Theory and Practice.

Beverly Moss is Associate Professor of English at The Ohio State University, where she teaches in the Rhetoric, Composition, and Literacy program, and is on the faculty at the Bread Loaf School of English. Her research and teaching interests focus on community literacy, composition theory and pedagogy, and writing center theories and practices. Her books include Literacy across Communities and A Community Text Arises: A Literate Text and a Literacy Tradition in African American Churches.

Carole Clark Papper recently retired from the Department of Writing Studies and Composition at Hofstra University, where she directed the University Writing Center. Previously, she served for many years as the Director of the Ball State University Writing Program (winner of the CCCC Certificate of Excellence for 2006-2007). Her scholarly interests include visual literacy, composition theory and pedagogy, and writing center theories and practices.

Keith Walters is Professor of Applied Linguistics at Portland State University, where he teaches sociolinguistics and discourse analysis. Previously, he taught in the Linguistics Department at the University of Texas at Austin and in the English Department at The Ohio State University. Much of his research has focused on issues of language and identity in Tunisia, where he served as a Peace Corps volunteer, and in the Arab world more broadly. He’s the coauthor of two other textbooks, Everything’s an Argument with Readings and What’s Language Got to Do with It?