Born of Lakes and Plains: Mixed-Descent Peoples and the Making of the American West (Hardcover) 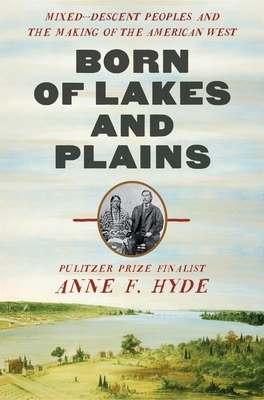 A fresh history of the West grounded in the lives of mixed-descent Native families who first bridged and then collided with racial boundaries.

Often overlooked, there is mixed blood at the heart of America. And at the heart of Native life for centuries there were complex households using intermarriage to link disparate communities and create protective circles of kin. Beginning in the seventeenth century, Native peoples—Ojibwes, Otoes, Cheyennes, Chinooks, and others—formed new families with young French, English, Canadian, and American fur traders who spent months in smoky winter lodges or at boisterous summer rendezvous. These families built cosmopolitan trade centers from Michilimackinac on the Great Lakes to Bellevue on the Missouri River, Bent’s Fort in the southern Plains, and Fort Vancouver in the Pacific Northwest. Their family names are often imprinted on the landscape, but their voices have long been muted in our histories. Anne F. Hyde’s pathbreaking history restores them in full.

Vividly combining the panoramic and the particular, Born of Lakes and Plains follows five mixed-descent families whose lives intertwined major events: imperial battles over the fur trade; the first extensions of American authority west of the Appalachians; the ravages of imported disease; the violence of Indian removal; encroaching American settlement; and, following the Civil War, the disasters of Indian war, reservations policy, and allotment. During the pivotal nineteenth century, mixed-descent people who had once occupied a middle ground became a racial problem drawing hostility from all sides. Their identities were challenged by the pseudo-science of blood quantum—the instrument of allotment policy—and their traditions by the Indian schools established to erase Native ways. As Anne F. Hyde shows, they navigated the hard choices they faced as they had for centuries: by relying on the rich resources of family and kin. Here is an indelible western history with a new human face.

Anne F. Hyde, a historian of the American West, is the author of Empires, Nations, and Families, winner of the Bancroft Prize and finalist for the Pulitzer Prize. She is professor of history at the University of Oklahoma in Norman, Oklahoma.

Anne F. Hyde writes compelling, boots-on-the-ground history, telling stories that are personal, poignant, and powerful. This is the way people really lived.
— Elizabeth A. Fenn, author of Encounters at the Heart of the World

Anne F. Hyde deftly reconstructs personal lives and relationships, charting the shift from an Indigenous and fur-trading world where marriage, kinship, and community building transcended racial differences to a world dominated by race and divided by ‘blood.’
— Colin G. Calloway, author of The Indian World of George Washington

A stunningly rich history of family and survival in the midst of war, forced removal, broken treaties, and racist policies.
— Kathleen DuVal, author of Independence Lost

Powerful, engrossing, and humane.
— Brian DeLay, author of War of a Thousand Deserts

A tour de force—poignant and beautifully written.
— Andrew R. Graybill, author of The Red and the White

Hyde tells stories that are gripping, tragic, inspiring, and, as she shows, essential to understanding the history of this vast region.
— Claudio Saunt, author of Unworthy Republic

Born of Lakes and Plains puts Native people at the heart of a timely new consideration of the ways that intermarriage has confounded—and demanded—the creation of racial categories. It is not to be missed.

Anne F. Hyde’s gripping account of mixed-descent families shows how tangled the real story of this country actually is. It puts our simple stories to shame.
— Richard White, author of Who Killed Jane Stanford?

[A] sweeping history….Hyde’s meticulous research and lucid prose bring her subjects and their complex worlds and canny survival strategies to vivid life. The result is an essential reconsideration of Native American history.
— Publishers Weekly (starred review)

A searching study of the role of mixed-descent people, with Indigenous and other ancestry, over 400 years of American history.
— Kirkus Reviews (starred review)