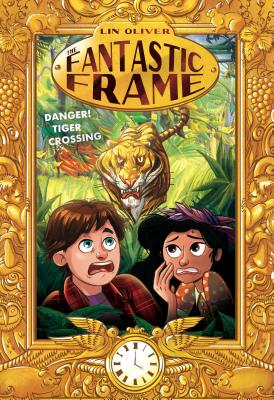 This is book number 1 in the The Fantastic Frame series.

This thrilling chapter book series will immediately suck readers in with its combination of fast-paced adventure and full-color art!

When ten-year-old Tiger Brooks and his family move into a new home, he sees some strange things at the house next door—like a talking pig in a top hat! When he and his neighbor, Luna Lopez, investigate, they discover a reclusive old woman and her magical golden frame, through which they can enter the world's greatest paintings. In this book, Tiger and Luna get pulled into the painting Surprised! or Tiger in a Tropical Storm by Henri Rousseau. But they must escape the jungle adventure before time runs out, otherwise they'll be trapped in the painting forever!

"Ten-year-old Tiger Brooks and his neighbor, Luna Lopez, get up-close and personal with Henri Rousseau’s “Tiger in a Tropical Storm” in this action-driven first book in the Fantastic Frame series." –Publishers Weekly

"Oliver keeps the plot itself snappy and peppy." -Kirkus

Lin Oliver is the New York Times best-selling author of more than thirty books for young readers. She is also a film and television producer, having created shows for Nickelodeon, PBS, Disney Channel, and Fox. The cofounder and executive director of the Society of Children's Book Writers and Illustrators, she loves to hang out with children's book creators. Lin lives in Los Angeles, in the shadow of the Hollywood sign, but when she travels, she visits the great paintings of the world and imagines what it would be like to be inside the painting—so you might say she carries her own Fantastic Frame with her!

Samantha Kallis is a Los Angeles-based illustrator and visual development artist. Since graduating from Art Center College of Design in Pasadena, California, in 2010, her work has been featured in television, film, publishing, and galleries throughout the world. Samantha can be found most days on the porch of her periwinkle-blue Victorian cottage, where she lives with her husband and their two cats. More of her work can be seen on her website: www.samkallis.com