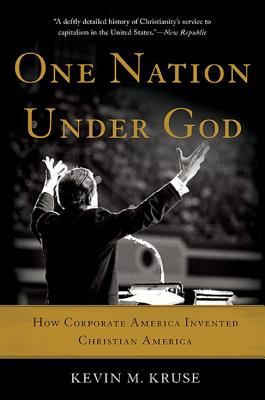 We're often told that the United States is, was, and always has been a Christian nation. But in One Nation Under God, historian Kevin M. Kruse reveals that the belief that America is fundamentally and formally Christian originated in the 1930s.

To fight the "slavery" of FDR's New Deal, businessmen enlisted religious activists in a campaign for "freedom under God" that culminated in the election of their ally Dwight Eisenhower in 1952. The new president revolutionized the role of religion in American politics. He inaugurated new traditions like the National Prayer Breakfast, as Congress added the phrase "under God" to the Pledge of Allegiance and made "In God We Trust" the country's first official motto. Church membership soon soared to an all-time high of 69 percent. Americans across the religious and political spectrum agreed that their country was "one nation under God."

Provocative and authoritative, One Nation Under God reveals how an unholy alliance of money, religion, and politics created a false origin story that continues to define and divide American politics to this day.

Kevin M. Kruse is a professor of history at Princeton University and the author or coeditor of five books, including Fault Lines and the award-winning White Flight. He lives in Princeton, New Jersey.

"A deftly detailed history of Christianity's service to capitalism in the United States."—New Republic

"Kruse tells a big and important story about the mingling of religion and politics since the 1930s."—New York Times Book Review

"An important and convincing reminder that the roots of Christianity were cultivated well before the era of the religious right."—Wall Street Journal

"An illuminating addition to the growing field of the history of American conservatism and capitalism, as well as a vibrant study of the way cultural influence works-one that will make it impossible to take for granted the small print on the back of a dollar bill ever again.... This is what's most interesting in the story Kruse is telling: the pattern of continuity and change that links our own time with those that came before."—The Nation