The Many Faces of Political Islam, Second Edition: Religion and Politics in Muslim Societies (Paperback) 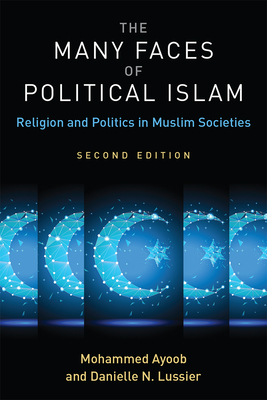 Analysts and pundits from across the American political spectrum describe Islamic fundamentalism as one of the greatest threats to modern, Western-style democracy. Yet very few non-Muslims would be able to venture an accurate definition of political Islam. Fully revised and updated, The Many Faces of Political Islam thoroughly analyzes the many facets of this political ideology and shows its impact on global relations.

“Lucidly written with a minimum of Arabic phrases, this book will interest non-Muslims and Muslims alike. Highly recommended.”
—Choice

“[I]n this thought-provoking and important book Ayoob dispels a number of widely held misconceptions about Islam . . . His nuanced interpretations of the many forms and expressions of political Islam around the world fully justify his claim that he has destroyed ‘the myth of the Islamic monolith.’”
—International Journal of Asia-Pacific Studies

“Although explicitly aimed at students in introductory courses and at nonspecialist readers, this is no dumbed-down textbook. Its argumentation is sophisticated, convincing, supported with ample empirical detail and presented in crisp, clear prose. While it does indeed fill the gap of a suitable introductory text to the subject, it will also be of value to specialists because of its intellectual merits and the wide scope of its coverage . . . The next time I teach a course on this subject, this is the book I shall use and strongly recommend that others do as well. It not only debunks pernicious myths, but it puts a clear case that is far more right than wrong and serves as an excellent thesis against which various antithetical ideas can be articulated and discussed.”
—Middle East Policy Review

“Mohammed Ayoob’s The Many Faces of Political Islam makes a fine contribution toward remedying this problem, offering a sophisticated and sweeping analysis that will be welcomed by multiple audiences. Written explicitly for advanced undergraduates and general readers, the book will also appeal to scholarly non-specialists looking for a wide-ranging, theoretically informed synthesis of the best work available. No existing book combines such comprehensiveness with clarity, confidence, and authority . . . Remarkable in scope, the book’s major contribution is its successful marriage of a compelling, theoretically sound general argument with a wide array of specific cases synthesizing the best work by specialists. Rather than offering a string of discrete, disconnected summaries of Islamist activity in various far-flung places, the book makes an exceptionally well-integrated argument about the national origins of Islamism. Its clever comparisons are designed to advance the larger claim while shedding light on the particular cases.”
—Perspectives on Politics

“In the early pages of this accessible short study, Ayoob lays to rest the ‘myth of the Islamic monolith’ and restores Islam and politics to history. Which means, as with other world religions, a complexity of continuity and change.”
—Foreign Affairs

"On the whole, the book is a useful single-volume read... It does an excellent job of taking us beyond the superficial lenses of newspaper columns, social media debates, and TV commentaries. Anyone interested in the texture of Muslim politics in the contemporary world will find much of value here."
—Pacific Affairs
— Partha S. Ghosh