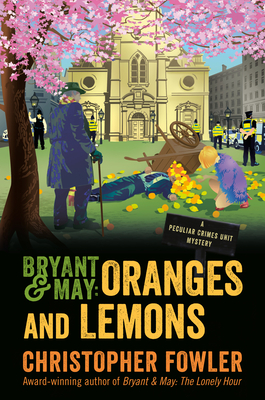 This is book number 17 in the Peculiar Crimes Unit series.

When a prominent politician is crushed by a fruit van making a delivery, the singular team of Arthur Bryant and John May overcome insurmountable odds to reunite the PCU and solve the case in this brainy new mystery from acclaimed author Christopher Fowler.

On a spring morning in London’s Strand, the Speaker of the House of Commons is nearly killed by a van unloading oranges and lemons for the annual St. Clement Danes celebration. It’s an absurd near-death experience, but the government is more interested in investigating the Speaker’s state of mind just prior to his accident.

The task is given to the Peculiar Crimes Unit—the only problem being that the unit no longer exists. Its chief, Raymond Land, is tending his daffodils on the Isle of Wight and senior detectives Arthur Bryant and John May are out of commission—May has just undergone surgery for a bullet wound and Bryant has been missing for a month. What's more, their old office in King’s Cross is being turned into a vegetarian tapas bar.

Against impossible odds, the team is reassembled and once again what should be a simple case becomes a lunatic farrago involving arson, suicide, magicians, academics and a race to catch a killer with a master plan involving London churches. Joining their team this time is Sidney, a young woman with no previous experience, plenty of attitude—and a surprising secret.

Christopher Fowler is the acclaimed author of the award-winning Full Dark House and sixteen other Peculiar Crimes Unit mysteries, as well as the PCU story collections London’s Glory and England’s Finest. In 2015, Fowler won the coveted Crime Writers’ Association Dagger in the Library Award in recognition for his body of work. He lives in London, where he is at work on his next Peculiar Crimes Unit novel.

Praise for Bryant & May: Oranges and Lemons

“Outstanding . . . Fowler again tests his leads with a bizarre series of crimes while devising a satisfying resolution. This long-running series remains as vital as ever.”—Publishers Weekly (starred review)

“As is the case with other books in the series, the setup is improbable (bordering on bizarre), the characters droll, the prose exceptionally clever and often hilarious and the ‘aha’ moment deliciously unexpected.”—BookPage