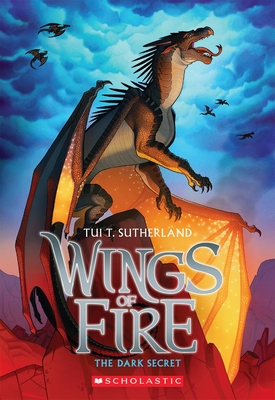 This is book number 4 in the Wings of Fire series.

The New York Times bestselling WINGS OF FIRE saga soars to the mysterious land of the NightWings, where Starflight must face a terrible choice -- his tribe, or his friends?
In the shadows, trouble is brewing. . .

The mysterious NightWings keep everything hidden, from their home and their queen to their allegiance in the war. Now they've kidnapped their own dragonet of destiny, and Starflight is finally meeting the rest of his tribe -- whether he wants to or not.

The NightWings have also kidnapped several innocent RainWings, now trapped in the dark, barren, miserable place that is the NightWing kingdom. Starflight wants to help the RainWings, but he's busy saving his own scales and trying to find a way back to his friends. The fate of two kingdoms rests in his talons, and with no one to save him, Starflight will have to find a way to be brave . . . before it's too late.

Tui T. Sutherland is the author of the New York Times and USA Today bestselling Wings of Fire series, the Menagerie trilogy, and the Pet Trouble series, as well as a contributing author to the bestselling Spirit Animals and Seekers series (as part of the Erin Hunter team). In 2009, she was a two-day champion on Jeopardy! She lives in Massachusetts with her wonderful husband, two awesome sons, and two very patient dogs. To learn more about Tui's books, visit her online at tuibooks.com.

"Dramatic battle scenes, double-crosses, and one seriously deranged queen makes WINGS OF FIRE a series that should have broad appeal for middle-grade fantasy fans." --BOOKLIST

"Fast-paced and detailed, this first installment in a new adventure series is entertaining." --KIRKUS

"Readers of all ages will be enchanted by the humanistic storyline and the page-turning excitement." --LIBRARY MEDIA CONNECTION