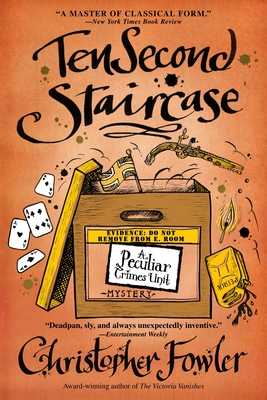 This is book number 4 in the Peculiar Crimes Unit series.

It’s a crime tailor-made for the Peculiar Crimes Unit: a controversial artist is murdered and displayed as part of her own outrageous installation. No suspects, no motive, no evidence—but this time they do have an eyewitness. A twelve-year-old claims the killer was a cape-clad highwayman atop a black stallion. Whoever the killer really is, he seems intent on killing off enough minor celebrities to become one himself. As “Highwayman Fever” grips London, Bryant and May, along with the newest member of the Unit, May’s agoraphobic granddaughter, April, find themselves sorting out a case involving artistic rivalries, sleazy sex affairs, the Knights Templars, feuding street gangs, and a decades-old crime spree that split up their partnership once before—and threatens to end it again…with murder.

Christopher Fowler is the acclaimed author of the award-winning Full Dark House and nine other Peculiar Crimes Unit mysteries: The Water Room, Seventy-Seven Clocks, Ten Second Staircase, White Corridor, The Victoria Vanishes, Bryant & May on the Loose, Bryant & May off the Rails, The Memory of Blood, and The Invisible Code. He lives in London, where he is at work on his next Peculiar Crimes Unit novel.

“The team of John May and Arthur Bryant…have the title ‘Coolest Old Men’ in a lock.…I’d follow these two guys anywhere.” —New Orleans Times-Picayune