The Constant Rabbit: A Novel (Hardcover) 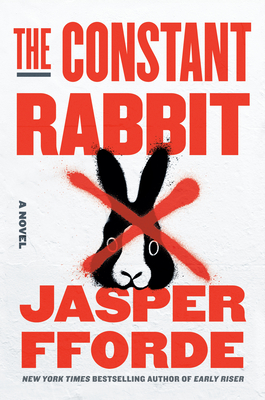 By Jasper Fforde
$28.00
Not available

"Reads like a crazed cross between Watership Down and Nineteen Eighty-Four."
--The Guardian

"Every book of Fforde's seems to be a cause for celebration."
-- Charles Yu, The New York Times Book Review on Early Riser

There are 1.2 million human-size rabbits living in the UK.

They wear clothes and can walk, talk and drive cars, the result of an inexplicable Spontaneous Anthropomorphizing Event fifty-five years earlier.

A family of rabbits is about to move into Much Hemlock, a cozy little village in Middle England where life revolves around summer fetes, jam making, gossipy corner stores, and the oh-so-important Spick & Span awards for the best-kept village.

No sooner have the rabbits arrived than the villagers decide they must depart, citing their propensity to burrow and breed, and their shameless levels of veganism. But Mrs Constance Rabbit is made of sterner stuff, and she and her family decide they are to stay. Unusually, their neighbors--longtime resident Peter Knox and his daughter, Pippa--decide to stand with them . . . and soon discover that you can be a friend to rabbits or to humans, but not both.

With a blossoming romance, acute cultural differences, enforced rehoming to a MegaWarren in Wales and the full power of the ruling United Kingdom Anti-Rabbit Party against them, Peter and Pippa are about to question everything they had ever thought about their friends, their nation, and their species.

An inimitable blend of satire, fantasy and thriller, The Constant Rabbit is the latest dazzlingly original foray into Jasper Fforde's ever-astonishing creative genius.

Jasper Fforde gave up his career in the fim industry when his novel The Eyre Affair debuted on the New York Times bestseller list in 2002. He is the author of the Thursday Next series, the Nursery Crimes series, and Shades of Grey. He lives and works in Wales.

"A political satire cloaked in Fforde’s trademark bizarre whimsy, the novel reads like a crazed cross between Watership Down and Nineteen Eighty-Four."
—Eric Brown, The Guardian

"Wonderfully absurd. . . . Is there anyone who can write satire quite like Fforde? . . . Brilliant. . . . An astonishingly well-crafted work of social and political satire."
—Kirkus Reviews (starred review)

"For all its parallels to real-world issues (race, immigration, vegan fundamentalism), The Constant Rabbit feels a bit more Bojack Horseman than Planet of the Apes, and it’s nowhere near as heavy-hoofed as Animal Farm. It’s a dystopia, but a cute one.”
—The Philadelphia Inquirer

"The Constant Rabbit is designed to shake readers out of that complacency: to recognise that merely holding liberal values is not enough to prevent the quickening advance of racism and xenophobia in this country. One must act."
—Financial Times

"The Constant Rabbit is Jasper Fforde’s most chilling and realistic book yet. . . . Fun and slightly bonkers. . . . Fforde’s love of wordplay, cultural references and silliness shines through in every sentence."
—Elizabeth Flux, The Guardian

"Jasper Fforde’s entertaining, surprisingly thoughtful yet fleet-footed new book—a standalone novel with a climax so dramatic, irrevocable, perfect yet unpredictable that it seems impossible to extend the book to a series—is the comedic master’s foray into this thematic realm. It is, as one might expect, by turns droll and hilarious, poignant and cruel, hopeful and despairing. In other words, a true comedy in depth, a form that is not mere mindless japes and slapstick, but one which counsels us that if we don’t laugh, we must cry."
—Locus

"This standalone novel from the author of the Thursday Next series is set in England, circa 2022, a country filled with over a million walking, talking, literate, car-driving, human-sized rabbits. The humans have gone so far as to vote the Anti-Rabbit Party into power, but their furry neighbors won’t go down without a fight."
—Gizmodo

"Fforde's engaging writing has created a story that is a clever blend of the biting allegorical satire we expect from Orwell's greatest hits and the good-natured adventures of Michael Bond's naïve and kind-hearted Paddington Bear."
―SciFi Now

"Huge fun . . . with all the inventive wordplay, impeccable worldbuilding and fiendish plotting that Fforde's 'Constant Readers' have come to expect."
―SFX

"As he did in Early Riser (2019), Fforde presents a milquetoast cog in an absurdly bureaucratic wheel, this time cleverly skewering Brexit, conservative politics, and white supremacy in this surprisingly uplifting tale of one man doing his best, even if it is the bare minimum."
—Booklist

"Fuelled by Fforde's trademark wit, imagination and brilliantly bizarre world-building. . . . You won't read anything quite like this in 2020—or beyond that too."
—CultureFly