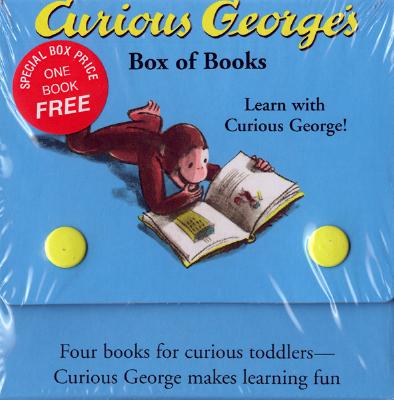 By H. A. Rey, Margret Rey
Not currently available
Hard to Find-The book is out of stock indefinitely at all sources. Copies may or may not be printed in the future

Curious George is one of the most beloved of all children’s book characters. Now, in these four board books, toddlers can learn about basic concepts—including the alphabet, opposites, emotions, and counting (forward and backward)—with the help of their favorite mischievous monkey.

The set includes Curious George’s Opposites Riding forward and backward on his bicycle and letting pigs in and out of their pen, George is up to his usual mischief in this simple book of opposites.

Curious George’s 1 to 10 and Back Again Help Curious George count ten of his favorite things, first forward and then backward.

Curious George’s ABCs Read from A to Z along with George in a condensed version of the classic Curious George Learns the Alphabet.

Curious George’s Are You Curious?
Do you ever feel like George? Are you curious? Are you mischievous? Curious kids can read along with their parents to see if they behave like the monkey best known for getting in and out of mischief.

Hans and Margret Rey created many books during their lives together, including Curious George, one of the most treasured classics of all time, as well as other favorites like Spotty and Pretzel. But it was their rambunctious little monkey who became an instantly recognizable icon. After the Reys escaped Paris by bicycle in 1940 carrying the manuscript for the original Curious George, the book was published in America in 1941. More than 200 Curious George titles followed, with 75 million books sold worldwide. Curious George has been successfully adapted into a major motion picture and an Emmy-winning television show on PBS.

The Reys were born in Hamburg, Germany. Hans Augusto Rey (1898-1977) met his wife-to-be, Margret (1906-1996), at a party in her father’s home in Germany; when he first caught a glimpse of her, she was sliding down the banister. In their twenties and thirties they lived in Paris and in Rio de Janeiro, where Hans sold bathtubs in villages along the Amazon River. Eventually Cambridge, Massachusetts, became the Reys’ home and community. Throughout their lives the Reys created many lively books together, including SPOTTY, PRETZEL, and lift-the-flap books such as HOW DO YOU GET THERE? The manuscript of the first Curious George books was one of the few items the Reys carried with them on their bicycles when they escaped from Paris in 1940. Eventually, they made their way to the United States, and CURIOUS GEORGE was published in 1941. Their incorrigible little monkey has become an American icon, selling millions of books and capturing the hearts of readers everywhere. CURIOUS GEORGE has been published in many languages, including French, German, Japanese, Afrikaans, and Norwegian. Additional Curious George books followed, as well as such other favorites as CECILY G. AND THE NINE MONKEYS and FIND THE CONSTELLATIONS. Visit www.curiousgeorge.com.