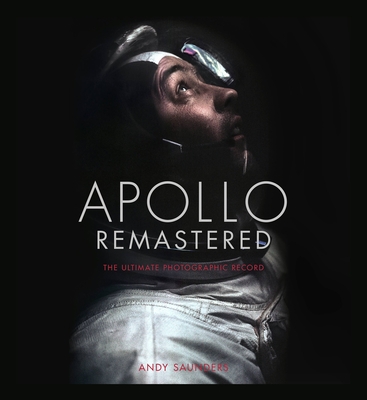 Published to coincide with the 50th anniversary of the last steps taken on the moon, this unique, definitive book about the Apollo missions reveals hundreds of extraordinary, newly-restored, and all-new images from the NASA archives that provide a never-before-seen perspective on the Apollo endeavors.

In Houston, Texas, there is a frozen vault that preserves the original NASA photographic film of the Apollo missions. For half a century, almost every image of the Moon landings publicly available was produced from a lower-quality copy of these frozen originals. Over the last few years, NASA image restorer Andy Saunders has been working hard. Taking newly available digital scans and applying pain-staking care and cutting-edge enhancement techniques, he has created the highest quality Apollo photographs ever produced. Never-before-seen spacewalks and crystal-clear portraits of astronauts in their spacecraft, along with startling new visions of the Earth and the Moon, offer astounding new insight into one of our greatest endeavors.

This is the definitive record of all Apollo missions and a mesmerizing, high-definition journey into the unknown.

Andy Saunders is one of the world's foremost experts of NASA digital restoration. His work has been exhibited at museums, and appeared in BBC News, Daily Telegraph, Smithsonian's Air & Space Magazine, Ars Technica, The Washington Post, as well as in NASA's own archives. He lives in Manchester, England.

Andy Saunders's remastered images are so clear and real that they are the next best thing to being there...They are an exact representation of what I remember from my journey to the Moon on Apollo 16. These photos reveal very precisely what the Moon was really like.—Charlie Duke, Charlie Duke, Apollo 16

The images Andy Saunders has produced from the 50 year old original film are just incredible. I have personally checked the images in the book, and if you want to know what it was really like on the Apollo missions, then this is for you. The photographs capture the pioneering era I took part in perfectly, and the techniques Andy has used have brought out such fantastic detail from that old original film we took back in the 60s. Maintaining an accurate record of these historic moments is such important work not just now, after half a century, but also for future generations.—Walter Cunningham, Walter Cunningham, Apollo 7