The Origin of Storms: The Lotus Kingdoms, Book Three (Hardcover) 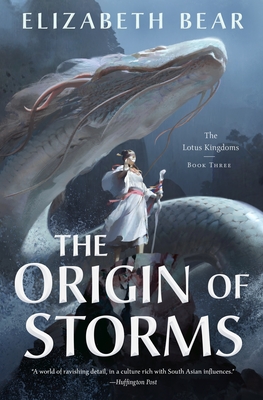 This is book number 3 in the The Lotus Kingdoms series.

Hugo Award-winning author Elizabeth Bear concludes her highly-acclaimed epic fantasy trilogy, The Lotus Kingdoms, which began with The Stone in the Skull and The Red-Stained Wings. It all comes to a surprising, satisfying climax in The Origin of Storms!

The Lotus Kingdoms are at war, with four claimants to the sorcerous throne of the Alchemical Emperor fielding three armies between them. Alliances are made, and broken, many times over—but in the end, only one can sit on the throne. And that one must have not only the power, but the rightful claim.

ELIZABETH BEAR was the recipient of the Astounding Award for Best New Writer in 2005. She has won two Hugo Awards and the Theodore Sturgeon Memorial Award for her short fiction. Bear lives in South Hadley, MA.

Praise for The Lotus Kingdoms

“Elizabeth Bear sweeps the reader into a world of ravishing detail.”—Huffington Post

“The Eternal Sky trilogy is one of the great fantasy epics of the last decade, and Bear triumphantly returns to that setting.”—Library Journal, starred review

“With a glorious and dramatic story, Bear begins a stunning new series set in the same world as her Eternal Sky trilogy.” —Publishers Weekly, starred review

“Captivatingly different in style and substance than Bear's previous trilogy but no less vivid, absorbing, and thrilling. In an overcrowded field, another entry that stands head and shoulders above nearly everything else.” —Kirkus Reviews, starred review

“The plot hews closely to the whole band-of-rogues-assemble-to-fight-stronger-band-of-foes . . . Bear noodles around that trope like a jazz master and takes the story to some interesting places . . .”—Locus

“This is a promising beginning indeed for an epic . . . and it will no doubt be a magnificent journey.”—Booklist