Mexicans in Revolution, 1910-1946: An Introduction (The Mexican Experience) (Paperback) 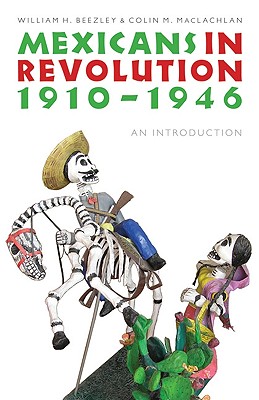 On November 20, 1910, Mexicans initiated the world’s first popular social revolution. The unbalanced progress of the previous regime triggered violence and mobilized individuals from all classes to demand social and economic justice. In the process they shaped modern Mexico at a cost of two million lives.
This accessible and gripping account guides the reader through the intricacies of the revolution, focusing on the revolutionaries as a group and the implementation of social and political changes. In this volume written for the revolution's centennial, William H. Beezley and Colin M. MacLachlan recount how the revolutionary generation laid the foundation for a better life for all Mexicans.

William H. Beezley is a professor of history at the University of Arizona. He is the author or editor of dozens of books, including Judas at the Jockey Club and Other Episodes of Porfirian Mexico, 2nd ed., available in a Bison Books edition, and is the coeditor of The Oxford History of Mexico.
Colin M. MacLachlan is the John Christie Barr Distinguished Professor of History at Tulane University. He has written numerous historical works, including Spain’s Empire in America: The Role of Ideas in Institutional and Social Change and Anarchism and the Mexican Revolution: The Political Trials of Ricardo Flores Magón in the United States.

"Mexicans in Revolution, 1910–1946 is a model of concision and clarity."—Marshall Poe, New Books in History
— Marshall Poe

"Beezley . . . and MacLachlan . . . provide an important summation of the wide-ranging issues pursued by Mexican revolutionaries to 'create a government responsive to the people.'"—J. B. Kirkwood, CHOICE
— J. B. Kirkwood

"William Beezley and Colin MacLachlan's Mexicans in Revolution, 1910–1946: An Introduction is an accessible primer to one of the most important events of Mexico's twentieth century."—Frank J. Klackle, The Americas
— Frank J. Klackle