No Meat Required: The Cultural History and Culinary Future of Plant-Based Eating (Hardcover) 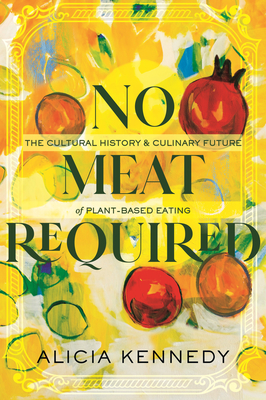 A culinary and cultural history of plant-based eating in the United States that delves into the subcultures and politics that have defined alternative food.

The vegan diet used to be associated only with eccentric hippies and tofu-loving activists who shop at co-ops and live on compounds. We’ve come a long way since then. Now, fine-dining restaurants like Eleven Madison Park cater to chic upscale clientele with a plant-based menu, and Impossible Whoppers are available at Burger King. But can plant-based food keep its historical anti-capitalist energies if it goes mainstream? And does it need to?

In No Meat Required, author Alicia Kennedy chronicles the fascinating history of plant-based eating in the United States, from the early experiments in tempeh production undertaken by the Farm commune in the 70s to the vegan punk cafes and anarchist zines of the 90s to the chefs and food writers seeking to decolonize vegetarian food today.

Many people become vegans because they are concerned about the role capitalist food systems play in climate change, inequality, white supremacy, and environmental and cultural degradation. But a world where Walmart sells frozen vegan pizzas and non-dairy pints of ice cream are available at gas stations – raises distinct questions about the meanings and goals of plant-based eating.

Kennedy—a vegetarian, former vegan, and once-proprietor of a vegan bakery—understands how to present this history with sympathy, knowledge, and humor. No Meat Required brings much-needed depth and context to our understanding of vegan and vegetarian cuisine, and makes a passionate argument for retaining its radical heart.

Alicia Kennedy is a writer from Long Island now living in San Juan, Puerto Rico. Her work on food and culture has been published in the New York Times, the Washington Post, T: The New York Times Style Magazine, Eater, Bon Appétit, and many other publications. She has a newsletter titled "From the Desk of Alicia Kennedy," where she publishes essays, cultural criticism, a podcast, and recipes.