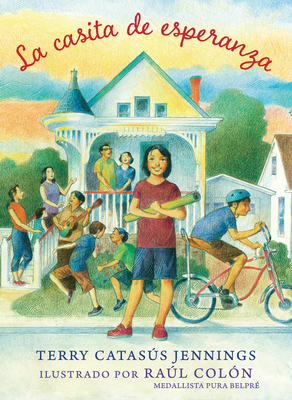 When Esperanza and her family arrive in the United States from Cuba, they buy a little house, una casita. It may be small, but they soon prove that there’s room enough to share with a whole community.

“It was a little house. Una casita . . .
It was small.
It smelled like old wet socks. . .
But even though they were far from home,
The family was together.”


As Esperanza and her family settle into their new house, they all do their part to make it a home, working multiple jobs and doing chores to pitch in.  When Mami’s sister Conchita comes to stay with them, she helps other families by taking care of their children during the day. Together they turn the house into a place where other new immigrants can help one another and feel accepted.

Esperanza is always the first to welcome them, making sure that la casita offers a home for those who don’t have a place to go. It’s a safe place in a new land.

Terry Catasus Jennings first came from Cuba to the U.S. in 1961, when she was twelve years old. With Una Casita de Esperanza, she tells an inspiring, semi-autobiographical story of how immigrants can help each other find their footing in a new country.

An English edition, The Little House of Hope, is also available.

Terry Catasús Jennings immigrated with her family from Cuba in 1961. The Little House of Hope is largely based on her experience as a child. She has won several prestigious children's book awards, including NSTA-CBC Outstanding Science Trade Book, NSTA Recommended, and Bank Street's Best Children's Book of the Year. She is the author of the Definitely Dominguita series and The Women's Liberation Movement, 1960-1990, which was listed in the ALA's Amelia Bloomer Project 2014-2015 List. Terry has been a contributor for the Smithsonian's Science Education Center books. Her articles have appeared in The Washington Post, Long Island News Day, and Ranger Rick. She is also an active member of The Children's Book Guild of Washington, DC and SCBWI. She and her husband live in Northern Virginia.

Raúl Colón is the recipient of the 2021 Eric Carle Honor. He is the award-winning illustrator of many picture books, including Draw! an ALA Notable Book and recipient of the International Latino Book Award; Jill Biden’s Don’t Forget, God Bless Our Troops; Imagine! an ALA Notable Book, a New York Public Library Best Book for Kids, and a Bookpage Best Book; Susanna Reich’s José! Born to Dance; and Angela’s Christmas by Frank McCourt. Mr. Colón lived in Puerto Rico as a young boy and now resides in New City, New York, with his family.

"Colón’s trademark watercolor and color pencil illustrations begin by showing the uncertainty of a new place with a gray, almost stormy sky as the backdrop to the unfamiliar, and then move on to depict a loving family, warm home, sunny outdoors, and the hopes and dreams of many who face difficulties in their attempts at a better life. The poetic Spanish text (an English edition, The Little House of Hope, is also available) deftly conveys these hopes and fears in a accessible way to young readers. A great selection that honestly presents the hardships and the victories of families working hard for a bright future."—School Library Journal