Specters of Violence in a Colonial Context: New Caledonia, 1917 (Hardcover) 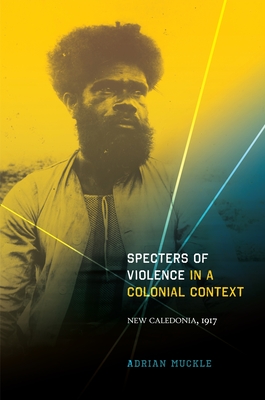 By Adrian Muckle
$79.75
Not available

During 1917-1918, war ravaged the hill country north of New Caledonia's main island, the Grande terre. Occurring sixty-four years after France's 1853 annexation of New Caledonia and in the midst of the Great War of 1914-1918, the conflict was known by the mid-twentieth century as "the last of the kanak revolts." It represented to many--until the "events" of the 1980s--the final pacification of Kanak (the indigenous people of New Caledonia).

Specters of Violence in a Colonial Context is the first comprehensive history of the 1917-1918 war, which involved the French army, European settlers, and Kanak. In three parts, it addresses the events leading to the outbreak of war, how those involved explained their role in the fighting, and how the war has since been represented. It explores the dynamics of fear, violence, and warfare in a colonial setting that was both European and Melanesian in character. In the face of a colonial historiography and memory that has downplayed consistently the war's significance, this history ultimately reevaluates the causes and scale of the war while explaining the local contexts in which decisions were taken by the various protagonists. The author draws on a rich and largely unexploited colonial archive that includes administrative dossiers detailing the repression, the correspondence of missionaries and indigenous Protestant teachers living in the region, the records of the judicial investigation that followed the war, and the reports on the post-war trial of seventy-eight "rebels." Specters of Violence in a Colonial Context will be warmly received by researchers and students of Pacific history and anthropology. Its broader audience will include those interested in the reverberations of World War I in the colonies and the nature of colonial/colonized interaction.