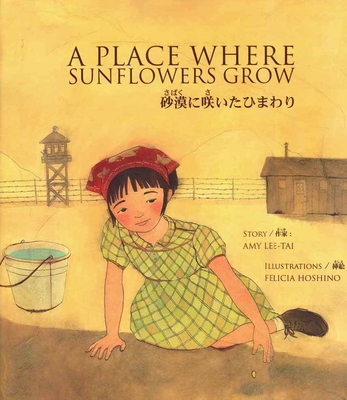 Bilingual English/Japanese. A young girl finds things to be joyful about in the Topaz Internment Camp.

Mari wonders if anything can bloom at Topaz, where her family is interned along with thousands of other Japanese Americans during World War II. The summer sun is blazingly hot, and Mari's art class has begun. But it's hard to think of anything to draw in a place where nothing beautiful grows. Somehow, glimmers of hope begin to surface under the harsh sun--in the eyes of a kindly art teacher, in the tender words of Mari's parents, and in the smile of a new friend.

Inspired by her family's experiences, author Amy Lee-Tai has crafted a story rooted in one of America's most shameful historical episodes--the internment of 120,000 Japanese Americans during World War II. The art schools which offered internees moments of solace and self-expression are a little known part of this history. Amy Lee-Tai's gentle prose and Felicia Hoshino's stunning mixed media images are a testimony to hope and how it can survive alongside even the harshest injustice.

Amy Lee-Tai was born in Queens, New York and is of Japanese and Chinese ancestry. She first learned of the internment from her mother and through her grandmother, Hisako Hibi's paintings. After earning her Master's in Education from Harvard, she worked in schools as a Reading Specialist. Amy now lives in Virginia with her husband and children. A Place Where Sunflowers Grow is her first book. FELICIA HOSHINO is an award-winning illustrator and graphic designer, who has also illustrated Lee & Low's A Place Where Sunflowers Grow and Little Sap and Monsieur Rodin. In addition to creating mixed-media images for children's books and magazines, she enjoys creating children's portraits, cooking with her husband, and decorating the walls at home with art created by her son and daughter. Hoshino lives in her native San Francisco, California, with her family. You can visit her online at felishino.com.