An Insider's Critique of the Kazakh Nation: Reflections on the Writings of Abai Kunanbai-uhli (Hardcover) 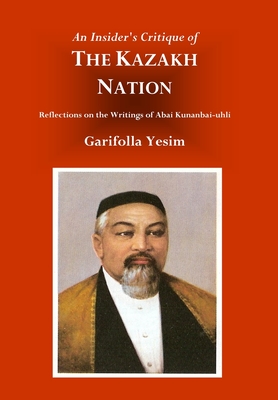 Making a unique contribution to the study of Eastern philosophy and Muslim reform movements within the context of Kazakh and broader Central Asian history, An Insider's Critique of the Kazakh Nation offers "a window on the Kazakh world" through the eyes of one of the most prominent and treasured national philosopher-reformers to have appeared in their history: Abai Kunanbai-uhli (1845-1904).Abai lived and wrote in the northeastern part of Kazakhstan from the latter part of the 19th to early 20th century serving as a pioneering and central figure in the Kazakh branch of the pan-Turkic, pan-Islamic 'Jadid' (i.e. 'new method') reform movement among the Muslims of Russia spearheaded by the Crimean Tatar Ismail Bey Gaspirali (aka Gasprinsky, 1851-1914). This situates Abai's work in its broader world historical setting among the parallel reform movements taking place across Asia among the Turks and Arabs of the Ottoman Empire, the Hindus and Indian nationalists of India, the Chinese nationalists and the Japanese Meiji reformers.Abai's writings, particularly his Book of Words, have received international recognition, with translations into Russian, French, German, Chinese, English and other world languages. In the second half of his Book of Words Abai offered various reflections - all recorded in the latter part of his life - on the entire range of Kazakh religious, cultural, social and political lifeways and institutions addressed against the backdrop of late Tsarist Russian imperial rule in Central Asia. He assesses what he considers to be the main obstacles to the advancement of Kazakh society in the face of Russian 'superiority' and domination, criticizing and praising both the Kazakhs and Russians in turn, offering suggestions for how the challenges facing his people might be overcome laced with lamentations for their failure to recognize and resolve these matters for themselves. He sets forth his reflections in a series of forty-five 'Words', each addressing a particular set of interrelated issues.While at least two translations of Abai's writings have been made into English (albeit through Russian), what makes the present volume unique is that instead of providing a simple translation, Abai's late 19th-century reflections are interpreted through the commentary of a top national Kazakh scholar looking back across the 20th century and lifting out their meaning and significance for the Kazakh world in the early post-Soviet era, at a time when the newly independent nation of Kazakhstan was just emerging from some 150 to 200 years of Russian domination. It represents an important contribution to the earliest stages of their search to re-define themselves and their future by looking back to one of the central pioneers to embark on that quest until it was interrupted by the long Soviet intermission. We are thus offered the critique of two insiders - Abai and Yesim - each standing at crucial crossroads in Kazakh and, indeed, world history.