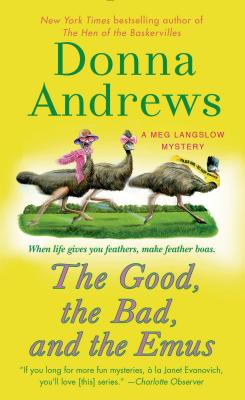 By Donna Andrews
$7.99
On Our Shelves Now

This is book number 17 in the Meg Langslow Mysteries series.

Meg Langslow knows that murder is never pretty. And things are about to take an ugly turn. . .
Go ahead...make Meg's day. It's not as if her life could get any weirder. Meg's long-lost paternal grandfather, Dr. Blake, entered her life a few years ago after seeing Meg's picture in the paper-she's a dead ringer for her grandmother, Cordelia, after all. Now local private investigator Stanley Denton has been hired to track down Cordelia's whereabouts...only to find that she mysteriously passed away within the year. And Meg's newly found cousin, Annabel, claims it was murder. So much for a festive family reunion...

"A sprightly mystery...Andrews's readers, who have come to expect a little silliness, fun-loving characters, and endings that are tough to predict, won't be disappointed." -Publishers Weekly

Stanley and Meg agree to help track down the killer and get justice for Cordelia. Dr. Blake has an idea about how to distract the locals from their investigation: He'll stage a rescue of the feral emus that have escaped from an abandoned local farm. When murder strikes again, Meg suspects that the killer may indeed be among the flock of rescue volunteers...but what now? While her grandfather pursues that lead, Meg continues to investigate both murders with a lot of help from Annabel, who can shed some light on some long-buried family secrets. But will they solve the case before the killer strikes again?

“A long-running series that gets better all the time. A fine blend of academic satire, screwball comedy, and murder.” —Booklist