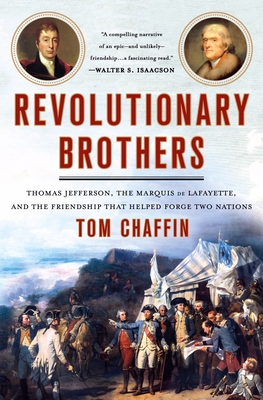 By Tom Chaffin
Not currently available
Not Available

As Lafayette opened doors in Paris and Versailles for Jefferson, so too did the Virginian stand by Lafayette as the Frenchman became inexorably drawn into the maelstrom of his country's revolution. Jefferson counseled Lafayette as he drafted The Declaration of the Rights of Man and remained a firm supporter of the French Revolution, even after he returned to America in 1789. By 1792, however, the upheaval had rendered Lafayette a man without a country, locked away in a succession of Austrian and Prussian prisons. The burden fell on Jefferson, along with Lafayette's other friends, to win his release. The two would not see each other again until 1824, in a powerful and emotional reunion at Jefferson’s Monticello.

Tom Chaffin is the author of, among other books, Giant's Causeway: Frederick Douglass's Irish Odyssey and the Making of an American Visionary; Sea of Gray: The Around-the-World Odyssey of the Confederate Raider Shenandoah; Pathfinder: John Charles Frémont and the Course of American Empire; and Revolutionary Brothers: Thomas Jefferson, the Marquis de Lafayette, and the Friendship that Helped Forge Two Nations. His writings have also appeared in the New York Times, the Oxford American, Time, Harper's, and other publications. He lives in Atlanta.

"A gripping narrative that offers a revelatory perspective on the combined origins of two nations...compelling drama and instructive history." —Wall Street Journal

“Rich in narrative detail…for those who enjoy their history chock-full of action and anecdotes.” —The American Scholar

"The period covered by this book was as momentous as any in the history of France or the US...an insightful dual biography." —Booklist

"Chaffin has emerged with a text packed with facts and insights into both men as well as the tumultuous times in which they lived. A must-have." —Kirkus Reviews

“A dual biography, exquisite in its execution, that opens wonderful old trapdoors connecting two great nations. In Chaffin’s deft hands, we see how this dynamic duo literally made history together, shaping the raw material of a young nation while testing the possibilities—and limits—of a trans-Atlantic friendship that was lasting and true.” —Hampton Sides, bestselling author of Blood and Thunder and On Desperate Ground

"Beautifully constructed and impressively balanced in its judgements on both men...a gripping read throughout.” —Munro Price, historian and award-winning author of The Road from Versailles

“Tom Chaffin’s well-told tale of two revolutions centers on the fascinating, sometimes intersecting careers of Thomas Jefferson and the Marquis de Lafayette...Chaffin is a reliable and engaging guide as he takes us on a page-turning journey through tumultuous times.” —Peter S. Onuf, Thomas Jefferson Foundation Professor of History, Emeritus, University of Virginia

“The key roles of two men who helped launch two revolutions that reshaped the Atlantic world in 1776 and 1789 and their friendship over almost half a century have found a worthy historian in Tom Chaffin...[a] dramatic story.” —Professor James M. McPherson, Pulitzer Prize-winning author of Battle Cry of Freedom

"[A] biography that, like its subject, never knows a dull moment.” —Pulitzer Prize-winning author James M. McPherson for Pathfinder

"An absorbing and illuminating read." —Nathaniel Philbrick, National Book Award-winning author of In the Heart of the Sea for Sea of Grey

"Fueled by obsessive scholarship and a boyish sense of wonder, Tom Chaffin takes us deep down into uncharted fathoms of the Civil War...fascinating." —Hampton Sides, bestselling author of Americana for The H.L. Hunley

"The boldest and most powerful book yet written on the saga of the H.L. Hunley." —Clive Cussler, New York Times bestselling author for The H.L. Hunley

"With the learning and literary style his readers have come to expect, Tom Chaffin, in Giant's Causeway, has provided the definitive account of Frederick Douglass' travels." —Walter Johnson, historian at Harvard University and bestselling author of River of Dark Dreams for Giant's Causeway