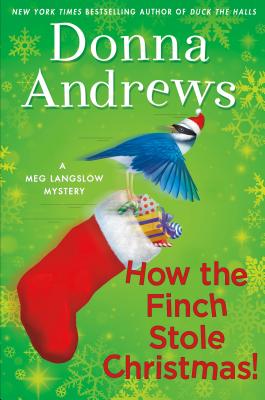 This is book number 22 in the Meg Langslow Mysteries series.

As in her previous Christmas mysteries, Six Geese a-Slaying, Duck the Halls, and The Nightingale Before Christmas, Andrews continues to write “firmly in the grand tradition of Agatha Christie’s Christmas books” (Toronto Globe and Mail).

New York Times bestselling author Donna Andrews takes us home to Caerphilly for the holidays in her new hilarious Christmas mystery How the Finch Stole Christmas!

Meg's husband has decided to escalate his one-man show of Dickens' A Christmas Carol into a full-scale production with a large cast including their sons Jamie and Josh as Tiny Tim and young Scrooge and Meg helping as stage manager.

The show must go on, even if the famous—though slightly over-the-hill—actor who's come to town to play the starring role of Scrooge has brought a sleigh-load of baggage and enemies with him. And why is Caerphilly suddenly overrun with a surplus of beautiful caged finches?

How the Finch Stole Christmas! is guaranteed to put the "ho ho hos" into the holidays of cozy lovers everywhere with its gut-bustingly funny mystery.