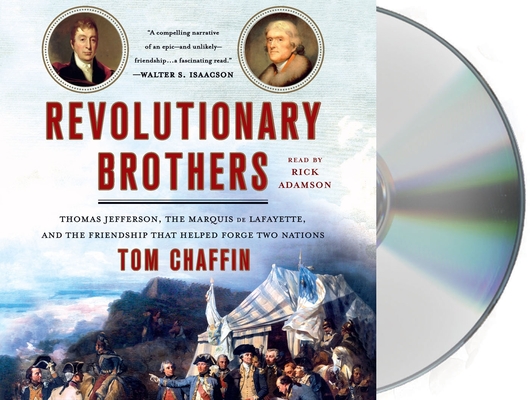 “...a gripping narrative that offers a revelatory perspective on the combined origins of two nations...compelling drama and instructive history.” -- Wall Street Journal

As Lafayette opened doors in Paris and Versailles for Jefferson, so too did the Virginian stand by Lafayette as the Frenchman became inexorably drawn into the maelstrom of his country's revolution. Jefferson counseled Lafayette as he drafted The Declaration of the Rights of Man and remained a firm supporter of the French Revolution, even after he returned to America in 1789. By 1792, however, the upheaval had rendered Lafayette a man without a country, locked away in a succession of Austrian and Prussian prisons. The burden fell on Jefferson and Lafayette's other friends to win his release. The two would not see each other again until 1824, in a powerful and emotional reunion at Jefferson’s Monticello.

"Revolutionary Brothers is a compelling narrative of an epic—and unlikely—friendship from the Enlightenment era, enlivened by bracing plot-turns and vividly-drawn characters."—Walter S. Isaacson, bestselling author of Benjamin Franklin: An American Life

Tom Chaffin is the author of, among other books, Giant's Causeway: Frederick Douglass's Irish Odyssey and the Making of an American Visionary; Sea of Gray: The Around-the-World Odyssey of the Confederate Raider Shenandoah; and Pathfinder: John Charles Frémont and the Course of American Empire. His writings have also appeared in the New York Times, the Oxford American, Time, Harper's, and other publications. He lives in Atlanta.

Rick Adamson has twenty years of experience in voiceovers, spoken word, acting, corporate sales training, and award-winning audiobook narration.  He is a Grammy nominee and an American Library Association award-winning narrator.  Most notably, his work includes reading for authors such as Bill Gates, Al Franken, O. Henry, and Susan Wilson, as well as Fast Food Nation, The Secret, and The Ransom of Red Chief. Adamson has done voiceovers for many Fortune 500 companies such as AT&T Labs, Pfizer, Merrill Lynch Online, Prudential Advisor, and Tyco. As a stage actor, he has performed both in NY theater and regional theater in productions such as You're a Good Man, Charlie Brown, Annie, and Cat on a Hot Tin Roof.