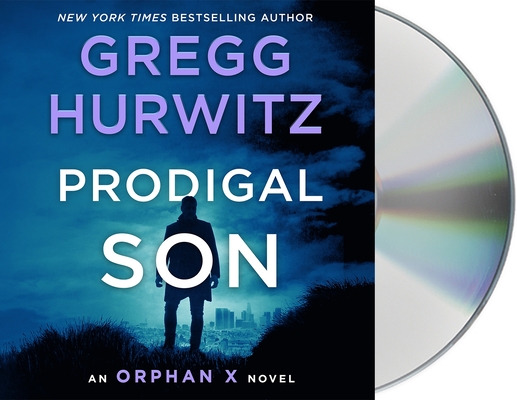 This is book number 6 in the Orphan X series.

"The winning combination of Gregg Hurwitz and Scott Brick returns for another action-packed listen featuring Evan Smoak...Brick is so convincing at embodying Smoak that listeners will be forgiven for thinking they too could take on four bad guys to protect a good guy in need of help." -- AudioFile Magazine

*This program contains a deep dive into the character and history of Tommy Stojack, featuring Gregg Hurwitz and fans of the Orphan X series.*

Forced into retirement, Evan Smoak gets an urgent request for help from someone he didn't even suspect existed—in Prodigal Son, the next New York Times bestselling Orphan X audiobook from Gregg Hurwitz.

As a boy, Evan Smoak was pulled out of a foster home and trained in an off-the-books operation known as the Orphan Program. He was a government assassin, perhaps the best, known to a few insiders as Orphan X. He eventually broke with the Program and adopted a new name—The Nowhere Man—and a new mission, helping the most desperate in their times of trouble. But the highest power in the country has made him a tempting offer—in exchange for an unofficial pardon, he must stop his clandestine activities as The Nowhere Man. Now Evan has to do the one thing he’s least equipped to do—live a normal life.

But then he gets a call for help from the one person he never expected. A woman claiming to have given him up for adoption, a woman he never knew—his mother. Her unlikely request: help Andrew Duran—a man whose life has gone off the rails, who was in the wrong place at the wrong time, bringing him to the deadly attention of very powerful figures. Now a brutal brother & sister assassination team are after him and with no one to turn to, and no safe place to hide, Evan is Duran’s only option. But when the hidden cabal catches on to what Evan is doing, everything he’s fought for is on the line—including his own life.

Scott Brick first began narrating audiobooks in 2000, and after recording almost 400 titles in five years, AudioFile magazine named Brick a Golden Voice and “one of the fastest-rising stars in the audiobook galaxy.” He has read a number of titles in Frank Herbert’s bestselling Dune series, and he won the 2003 Science Fiction Audie Award for Dune: The Butlerian Jihad. Brick has narrated for many popular authors, including Michael Pollan, Joseph Finder, Tom Clancy, and Ayn Rand. He has also won over 40 AudioFile Earphones Awards and the AudioFile award for Best Voice in Mystery and Suspense 2011. In 2007, Brick was named Publishers Weekly’s Narrator of the Year.

Brick has performed on film, television and radio. He appeared on stage throughout the United States in productions of Cyrano, Hamlet, Macbeth and other plays. In addition to his acting work, Brick choreographs fight sequences, and was a combatant in films including Romeo and Juliet, The Fantasticks and Robin Hood: Men in Tights. He has also been hired by Morgan Freeman to write the screenplay adaptation of Arthur C. Clarke’s Rendezvous with Rama.