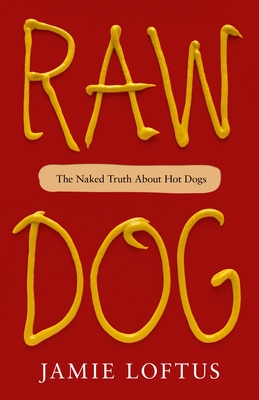 Part travelogue, part culinary history, all capitalist critique—comedian Jamie Loftus's debut, Raw Dog, will take you on a cross-country road trip in the summer of 2021, and reveal what the creation, culture, and class influence of hot dogs says about America now.

Hot dogs. Poor people created them. Rich people found a way to charge fifteen dollars for them. They’re high culture, they’re low culture, they’re sports food, they’re kid’s food, they’re hangover food, and they’re deeply American, despite having no basis whatsoever in America's Indigenous traditions. You can love them, you can hate them, but you can’t avoid the great American hot dog.

Raw Dog: The Naked Truth About Hot Dogs is part investigation into the cultural and culinary significance of hot dogs and part travelog documenting a cross-country road trip researching them as they’re served today. From avocado and spice in the West to ass-shattering chili in the East to an entire salad on a slice of meat in Chicago, Loftus, her pets, and her ex eat their way across the country during the strange summer of 2021. It’s a brief window into the year between waves of a plague that the American government has the resources to temper, but not the interest.

So grab a dog, lay out your picnic blanket, and dig into the delicious and inevitable product of centuries of violence, poverty, and ambition, now rolling around at your local 7-Eleven.

The hardcover edition of Raw Dog: The Naked Truth About Hot Dogs includes gorgeous endpapers as well as illustrations by the author throughout.

JAMIE LOFTUS is a comedian, Emmy-nominated TV writer, and podcaster. She’s worked as a staff writer on Teenage Euthanasia, Robot Chicken, and Star Trek: Lower Decks, and wrote and starred in her own web series for Comedy Central. She writes and hosts popular limited-run podcasts—“My Year In Mensa” (2019), “Lolita Podcast” (2020), “Aack Cast” (2021), and “Ghost Church” (2022)—and cohosts, with screenwriter Caitlin Durante, a podcast on the How Stuff Works Network called “the Bechdel Cast.” She has her baby teeth bronzed and loaded into a slingshot.

"Thrilling, irreverent, and invigorating . . . Loftus writes with the laugh-a-minute cadence of a Fey, the twisting, somersaulting vitality of a young Eggers." —Jack O'Brien, Founder, Cracked.com and Head of Comedy, iHeartPodcast Network

"One of the most interesting voices in podcasting . . . It is Loftus’s probing curiosity that is her greatest asset." —The New Yorker

“Diving headfirst into a minefield of impossible yet crucial questions.” —Mashable