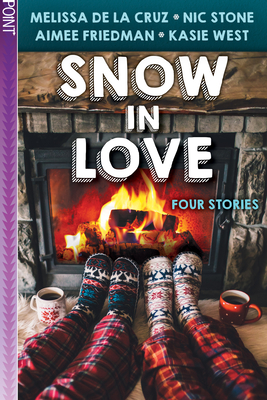 Perfect for fans of Let It Snow, this irresistible collection of wintry love stories is guaranteed to bring on the warm fuzzies.
What's better than one deliciously cozy, swoon-worthy holiday story?

Four of them, from some of today's bestselling authors.

From KASIE WEST, a snowy road trip takes an unexpected detour when secrets and crushes are revealed.

From AIMEE FRIEDMAN, a Hanukkah miracle may just happen when a Jewish girl working as a department store elf finds love.

From NIC STONE, a scavenger hunt amid the holiday crowds at an airport turns totally romantic.

So grab a mug of hot cocoa, snuggle up, and get ready to fall in love...

Melissa de la Cruz is the #1 New York Times bestselling author of many critically acclaimed and award-winning novels for readers of all ages, including her most recent hits: Disney's Descendants series; the Blue Bloods series; the Witches of East End series (which was adapted into a two-season television drama on Lifetime); Alex & Eliza: A Love Story; Something in Between; and Pride and Prejudice and Mistletoe. Melissa is the co-director of YALLFest (Charleston, South Carolina) and the co-founder of YALLWest (Santa Monica, California). She grew up in Manila and she now lives in West Hollywood, California, with her husband and daughter. Learn more at melissa-delacruz.com.

Nic Stone is the New York Times bestselling author of the novels Dear Martin and Odd One Out. She was born and raised in a suburb of Atlanta, Georgia, and the only thing she loves more than an adventure is a good story about one. After graduating from Spelman College, she worked extensively in teen mentoring and lived in Israel for a few years before returning to the US to write full-time. Growing up with a wide range of cultures, religions, and backgrounds, she strives to bring these diverse voices and stories to her work. Learn more at nicstone.info.

Kasie West is the author of several YA novels, including The Fill-in Boyfriend, P.S. I Like You, Lucky in Love, Listen to Your Heart, and Maybe This Time. Her books have been named as ALA Quick Picks for Reluctant Readers and as YALSA Best Books for Young Adults. Kasie lives in Fresno, California, with her family, and you can visit her online at kasiewest.com.

From "Grounded" by Nic Stone

Frankly, it shouldn't be that big a deal, getting an innocuous pair of text messages from Harper Kemp. Yeah, it's been three years since the girls have seen one another, and yeah, they're about to inhabit the same space in Palm Beach for a solid seven days, nine hours, and thirty-two minutes -- Leigh did the math the minute Mama and Daddy smacked her with the news that they'd be spending Christmas through New Year's Day at the home of Janice and Kwame Kemp, their best friends from college.

But it clearly is a big deal if Leigh's heart is racing the way it does just before she reads a new piece of poetry at an open mic night. Like some part of her soul is about to be on display and people can throw whatever they want at it. Which is so dumb. They're texts.

Leigh taps back over to the messages from a number with no name attached.

Leigh? This is Harper. Kemp.

Leigh would've known it was Harper Kemp without the second message -- ten minutes before she got the messages, she was on the phone with Mama, who'd let her know Oh hey, sweetheart, Harper's stuck in Atlanta too. Her flight was earlier than yours, but also got canceled. I gave Janice your number to pass along to Harper, so she'll probably reach out. Maybe the two of you can wait things out together.

And even without that Leigh would've known.

There's only one Harper.