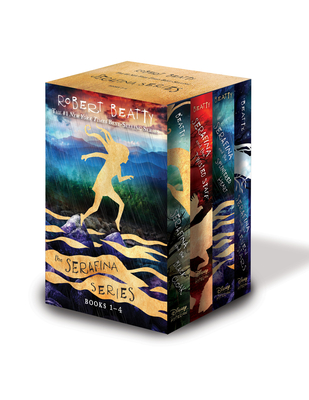 By Robert Beatty
$67.96
Available to Order. Arrives from Warehouse in 2-14 days.

The #1 New York Times best-selling series by Robert Beatty is now available in one spooky hardcover boxed set. Follow the brave and beloved heroine through her hair-raising adventures at the Biltmore estate in Serafina and the Black Cloak, Serafina and the Twisted Staff, Serafina and the Splintered Heart, and Serafina and the Seven Stars. This gorgeous set will delight loyal fans and new readers alike.
Praise for the Serafina series:
"The story drips with suspense, wrapping readers in to the narrative just as easily as the man in the black cloak binds his young victims. Serafina's friendship with Braeden is heartfelt and believable... mystery fans will enjoy this book... A creepy, suspenseful read."
--School Library Journal
*"From the first gripping page, the book pulses with action and intrigue... Each character continues to surprise both one another and readers with their emotional complexity. A captivating, edge-of-your-seat, action-packed fantasy."
--Kirkus Reviews, starred review

Robert Beatty is the author of the #1 New York Times best-selling Serafina series published by Disney Hyperion, a spooky mystery-thriller about a brave and unusual girl who lives secretly in the basement of the grand Biltmore Estate.
Serafina and the Black Cloak was a #1 New York Times best seller, has been on the list for more than 59 weeks, and won the prestigious 2016 Pat Conroy Southern Book Prize. The second book in the series, Serafina and the Twisted Staff, became a #1 New York Times best seller in the first week of its launch and earned a "Starred Review" from Kirkus Reviews, which said, "Even better than its predecessor, a sequel that delivers nonstop thrills from beginning to end." Enjoyed by both young readers and adults, the books are being taught in over a thousand classrooms nationwide. The third book in the Serafina series comes out in July 2017.
Robert Beatty lives in the Blue Ridge Mountains of Asheville, North Carolina with his wife and three daughters, who help create and refine his stories. He loves to explore Biltmore Estate and the darkened forest trails where his novels take place. He writes full-time now, but in his past lives, Robert was one of the early pioneers of cloud computing, the founder/CEO of Plex Systems, the co-founder of Beatty Robotics, and the chairman/CTO of Narrative Magazine. In 2007, he was named an Entrepreneur of the Year. When asked about the inspiration for his books, Robert said, "Serafina's journey grew out of my desire to write a story about an unusual and heroic young girl for my three daughters."

PRAISE FOR SERAFINA AND THE BLACK CLOAK

"The story drips with suspense, wrapping readers in to the narrative just as easily as the man in the black cloak binds his young victims. Serafina's friendship with Braeden is heartfelt and believable... mystery fans will enjoy this book... A creepy, suspenseful read."—School Library Journal