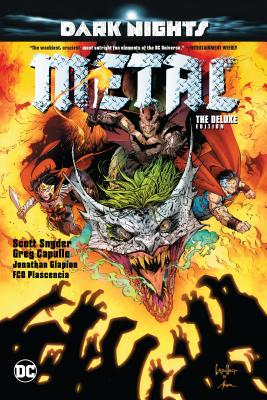 By Scott Snyder, Greg Capullo (Illustrator)
$29.99
On Our Shelves Now

The Dark Multiverse is coming, and nothing will ever be the same! One of the biggest events in DC history is here in the shocking, action-packed epic Dark Nights: Metal from critically acclaimed author Scott Snyder and Greg Capullo, reuniting after their smash-hit Batman series.

Beyond our universe there is the Multiverse... and beneath the Multiverse is a nightmare realm where every fear that has ever been felt on our Earth becomes reality. Now an evil force as old as time wants to drag us down into the shadows, into the realm of never-ending terror.

But when the door between worlds opens, it's not just any nightmares that come spilling out. They call themselves the Dark Knights. Each one is a twisted version of Batman from a world where one of his worst fears has come true.

With the invasion underway and Batman trapped in the Dark Multiverse, the Justice League must undergo an impossible quest to find the mysterious metals capable of repelling the Dark Knights and their master, the fearsome Barbatos. If they fail, everything they've ever known will be plunged into eternal darkness. But the true horror is... what if they're already too late?

Scott Snyder is a #1 New York Times best-selling writer and one of the most critically acclaimed scribes in all of comics. His works include Batman, All-Star Batman, Batman: Eternal, Superman Unchained, American Vampire, and Swamp Thing. He has also been published in Zoetrope, Tin House, One Story, Epoch, Small Spiral Notebook, and other journals, and has a short story collection, Voodoo Heart, which was published by Dial Press. He teaches at Columbia University and Sarah Lawrence University and lives in New York with his wife, Jeanie, and his son, Jack Presley.

Greg Capullo is a self-taught Illustrator and the current artist on the best-selling and highly acclaimed Batman series for DC Comics. Prior to that, he was best known for his 80 issue run on Image Comics' Spawn, created by Todd McFarlane. Other popular comics work includes Marvel Comics’ X-Force and Quasar (as well as a slew of one-shot titles). He is also the creator of The Creech, a Sci-Fi/Horror comic published by Image Comics. Greg has provided art for Blizzard Entertainment’s World of Warcraft, contributed lead character designs for the award-winning HBO animated Spawn series, was the cover artist for many popular musical groups including Korn and Disturbed, and worked behind the scenes on many projects ranging from toy design to video games for TME.

Praise for Scott Snyder and Greg Capullo's Batman: "Scott Snyder has reinvented Batman, deepening and humanizing the Dark Knight's myth like no one since Frank Miller in the 1980s." —The New York Times

"This is the Snyder and Capullo show. This is the work of two men at the top of their games. They have never been more confident in their storytelling." —New York Post

"This is a book you need to read. Whether you're a fan of comics or not." —Huffington Post

“Packed as it is with both real steel and rock 'n roll.” —Syfy Wire

“Dark Nights: Metal is the Batman of your wildest nightmares.” —Polygon

"One of the best creative teams it's ever had." —Nerdist