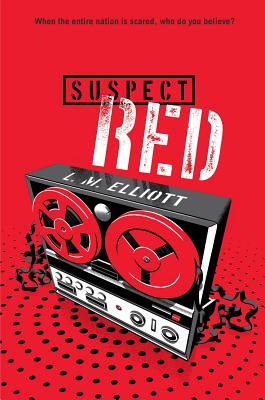 It's 1953, and the United States has just executed an American couple convicted of spying for the Soviet Union. Everyone is on edge as the Cold War standoff between communism and democracy leads to the rise of Senator Joe McCarthy and his zealous hunt for people he calls subversives or communist sympathizers. Suspicion, loyalty oaths, blacklists, political profiling, hostility to foreigners, and the assumption of guilt by association divide the nation. Richard and his family believe deeply in American values and love of country, especially since Richard's father works for the FBI. Yet when a family from Czechoslovakia moves in down the street with a son Richard's age named Vlad, their bold ideas about art and politics bring everything into question.

Richard is quickly drawn to Vlad's confidence, musical sensibilities, and passion for literature, which Richard shares. But as the nation's paranoia spirals out of control, Richard longs to prove himself a patriot, and blurred lines between friend and foe could lead to a betrayal that destroys lives.

Punctuated with photos, news headlines, ads, and quotes from the era, this suspenseful and relatable novel by award-winning New York Times best-selling author L.M. Elliott breathes new life into a troubling chapter of our history.

L. M. Elliott (www.LMElliott.com) is the author of Under a War-Torn Sky-a NCSS/CBC Notable Book in Social Studies, Jefferson Cup Honor Book, one of Bank Street College of Education Best Books of the Year, and winner of the Borders' Original Voices Award-and its companions, A Troubled Peace (also a NCSS/CBC Notable) and Across a War-Tossed Sea (a Jefferson Cup Overfloweth title); as well as Annie, Between the States, a New York Times Young Adult E-Book Bestseller, an IRA Teacher's Choice, and NYPL Book for the Teen Age, Give Me Liberty, DaVinci's Tiger, and Hamilton and Peggy! A Revolutionary Friendship.

"A tense, engrossing story that effectively captures the suspicion and paranoia that prevailed during American history's darkest chapters."—Kirkus Reviews

"Elliot does a masterful job of incorporating fictional people into a historical scenario. Even with the heavy historical references and background, the story of Richard and Vlad shines through... Libraries with or without good historical fiction sections will enhance their collection with this selection."—School Library Connection

"This historical novel is filled with Richard's naive, offbeat humor...rich historical setting...Richard's literature-driven ideas...and his rare friendship with Vladimir make his experiences as memorable as they are painful. The book's formatting is integral to its impact. Each chapter begins with red and black graphic art, articles from the era, and primary source photographs. The red pages add to the ominous paranoia presented in the book."—School Library Journal