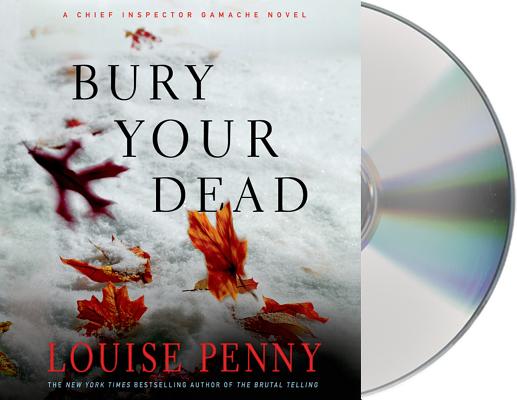 This is book number 6 in the Chief Inspector Gamache Novel series.

“Timing is critical in a mystery. Just how much is revealed and when is what keeps the reader turning pages. Louise Penny nails both in this book, the sixth in the series featuring the Canadian Inspector Gamache. Engaging characters from previous books make their appearances, but it isn't necessary to have read the others to totally enjoy this book. Those who have read the others are eagerly awaiting this book, and those who start with this one will quickly turn to the other titles in the series. Heartily recommended for all lovers of good mysteries.”
— Ann Carlson, Harborwalk Books, Georgetown, SC

Bury Your Dead is a novel about life and death—and all the mystery that remains—from #1 New York Times bestselling author Louise Penny.

Chief Inspector Armand Gamache is on break from duty in Three Pines to attend the famed Winter Carnival up north. He has arrived in this beautiful, freezing city not to join the revels but to recover from an investigation gone hauntingly wrong. Still, violent death is inescapable—even here, in the apparent sanctuary of the Literary and Historical Society, where one obsessive academic’s quest for answers will lead Gamache down a dark path. . .


Meanwhile, Gamache is receiving disturbing news from his hometown village. Beloved bistro owner Olivier was recently convicted of murder but everyone—including Gamache—believes that he is innocent. Who is behind this sinister plot? Now it’s up to Gamache to solve this killer case. . .and relive a terrible event from his own past before he can begin to bury his dead.

LOUISE PENNY is the author of the #1 New York Times, USA Today, and Globe and Mail bestselling series of Chief Inspector Armand Gamache novels, and coauthor with Hillary Rodham Clinton of the #1 New York Times bestselling thriller State of Terror. She has won numerous awards, including a CWA Dagger and the Agatha Award (seven times), and was a finalist for the Edgar Award for Best Novel. In 2017, she received the Order of Canada for her contributions to Canadian culture. Louise lives in a small village south of Montréal.

Ralph Cosham is best known as the voice behind all of Louise Penny’s bestselling Chief Inspector Gamache novels. He won the 2013 Audie Award for Louise Penny’s A Beautiful Mystery. He is a film, stage, and voice actor who narrated over 100 audiobooks, including Frankenstein, Around the World in Eighty Days, Alice in Wonderland, and Watership Down. His audiobook credits include works by C.S. Lewis, Simon Brett and C.S. Forester.  Several of his works have been awarded Audio Best of the Year by Publisher’s Weekly.

“Ralph Cosham's excellent narration of Louise Penny's newest mystery demonstrates why a terrific narrator is an author's best partner…My only quibble is that the Penny-Cosham team kept me listening past my bedtime.” —AudioFile magazine

“This sixth entry in Agatha and Anthony award-winning author Penny's Armand Gamache series is among the best…The solution to both killings as well as the event that drew Gamache to Quebec in the first place are all slowly and expertly revealed.” —Library Journal