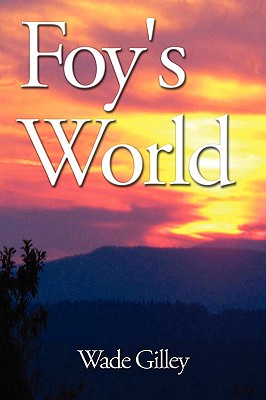 Foy's World This story grew out of many childhood memories growing up in the Blue Ridge Mountains where Wade Gilley was born. Wade has previously written two memoirs about two central figures in his life: his mother Forest Gilley, Life Before Sister, and his grandmother Oda Gilley, Damn Right It Hurts. Foy's World is his first effort to write fiction. This story is primarily told through a series of conversations between a 45-year old grandmother, Sophia "Sophie" Robinson, and her 10-year old grandson, McFoy or "Foy" Robinson while sitting on the front porch of a deteriorating family home opposite a gushing mountain waterfall named Shining Springs. Two questions are central in this story: First, Foy is obsessed with who he is, as an older cousin named Clyde has not so slyly called him "Colored." Ongoing discussions provide insight into the mountain culture of the time as Sophie and Foy, with the occasional unscheduled assistance of Foy's five year old sister, Rose Robinson, discuss the life and times as well as debate his origins sitting on that front porch looking at the waterfall. Then, a murder occurs at the local movie theater and that story becomes intertwined with the continuing discussion of Foy's origins and life itself. A third and central character in this story, Rob "Whiskers" Goins, is arrested, tried and convicted for murder only to escape when some of his relatives shoot up the courthouse and succeed in setting him free. During the ensuing national manhunt, Goins emerges in the front porch discussions as a "non-church" Jew who just might be related to Foy. Needless to say the times, language and culture are intertwined throughout the book and provide insight into a hardscrabble life of a proud mountain culture in the 1930s.