Daughter of Empire: My Life as a Mountbatten (Hardcover) 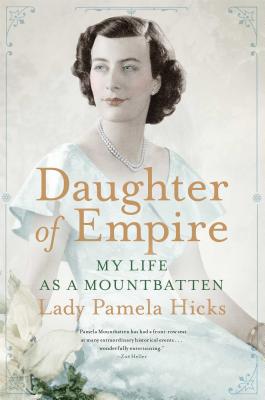 By Pamela Hicks
Not currently available
Not Available

This magical memoir about a singular childhood in England and India by the daughter of Lord Louis and Edwina Mountbatten provides a privileged glimpse into the lives and loves of some of the twentieth century’s leading figures.

Few families can boast of not one but two saints among their ancestors, a great-aunt who was the last tsarina of Russia, a father who was Grace Kelly’s pinup, and a grandmother who was not only a princess but could also argue the finer points of naval law. Pamela Mountbatten entered a remarkable family when she was born at the very end of the Roaring Twenties.

As the younger daughter of the glamorous heiress Edwina Ashley and Lord Louis Mountbatten, Pamela spent much of her early life with her sister, nannies, and servants—and a menagerie that included, at different times, a bear, two wallabies, a mongoose, and a lion. Her parents each had lovers who lived openly with the family. The house was always full of guests like Sir Winston Churchill, Noël Coward, Douglas Fairbanks, and the Duchess of Windsor (who brought a cold cooked chicken as a hostess gift).

When World War II broke out, Lord Mountbatten was in command of HMS Kelly before being appointed chief of Combined Operations, and Pamela and her sister were sent to live on Fifth Avenue in New York City with Mrs. Cornelius Vanderbilt. In 1947, her parents were appointed to be the last viceroy and vicereine of India and oversee the transfer of power to an independent Indian government. Amid the turmoil of political change, Pamela worked with student leaders, developed warm friendships with Gandhi and Nehru, and witnessed both the joy of Independence Day and its terrible aftermath. Soon afterwards, she was a bridesmaid in Princess Elizabeth’s wedding to Prince Philip, and was a ladyin- waiting at the young princess’s side when she learned her father had died and she was queen.

Vivid and engaging, well-paced and superbly detailed, this witty, intimate memoir is an enchanting lens through which to view the early part of the twentieth century.

Pamela Hicks is the daughter of Lord Louis and Edwina Mountbatten. She was Lady-in-Waiting to the Queen both when she was a princess and following her coronation. In 1960 she married the internationally celebrated designer David Hicks. She is the author of India Remembered and lives in Oxfordshire.

"Joyously entertaining...In what is arguably the poshest book that ever has or will be written, Hicks remembers it all with immense charm, wit, and brio, capturing a bygone world of country estates, glass cigarette holders kept in a petticoat pocket, sapphire-studded powder compacts, dials on bedroom doors turned to indicate when you'd like to be woken with tea and biscuits, and enough pets to populate an exotic zoo....entrancing."

"If you are addicted to "Downton Abbey," chances are that you will relish Daughter of Empire, a British aristocrat's memoir of her childhood and coming of age…. Her contribution—and it is a valuable one—is to provide the personal details that make history come to life. She writes in a natural, conversational style, with a wry sense of humor. She is also a keen observer of a way of life now vanished, except on PBS.”

“Think Wodehouse with an R rating…Hicks has a talent for the telling detail and can deliver a line with an appealing and often amusing briskness.”

“Are you still recovering from royal-baby fever? Counting down the days until the newest season of “Downton Abbey”? A new memoir, Daughter of Empire, by Lady Pamela Hicks — whose father was Lord Louis Mountbatten, whose cousin is Prince Philip and whose great-great-grandmother was Queen Victoria — may be just what you need.…Lady Pamela presents an honest yet blithe portrayal of her famous, eccentric family and offers a glimpse into the inner circle of Britain’s royalty.”

"Not many people remain who can tell stories like Lady Pamela Hicks...."

“More thought-provoking than some titles that have trickled out during the current popularity of TV’s “Downton Abbey.” This memoir has, along with personal narrative, a good helping of history – of a certain sort, told through the eyes of one very well-placed woman. To call Lady Pamela Hicks’s position a front-row seat is an underestimation of her vantage point; more to the fact, Hicks was a participant in many of these events. … And so, for its historical sweep and its uniquely vantaged window onto many important moments of the middle of the last century, Daughter of Empire is something for “Downton” fans – and even others interested in England, class and monarchy – to look out for.”

"The story of Lady Hicks, who lived the kind of life we think of as only existing in books and movies, with nannies, governesses and all the trappings of the English elite....Many fans of Downton Abbey will certainly enjoy it."

“Lady Pamela’s memoir will appeal to those who like to take a peek into the lifestyles of the royal and famous. Underneath the glamour and glitz, this brief autobiography has a bit more substance, since Hicks was the daughter of Lady and Lord Mountbatten, cousin-in-law to Queen Elizabeth II, and an eyewitness to and a participant in some of the most momentous events of the twentieth century (especially from a British perspective). Of special note is her description of life in India during the transition to independence and her role as lady-in-waiting to the Queen during the royal world tour of 1954. Rather than exercising the 'poor little rich girl' approach popular with many emotionally neglected daughters of fortune, Hicks adopts a more sanguine tone, reveling in the rich texture of her life and experiences.”

"Pamela Mountbatten has had a front row seat at many extraordinary historical events and, as this wonderfully entertaining memoir shows, the privilege has not been wasted on her. Her wry, intimate portraits of royals, politicians, and Hollywood stars are a joy to read."
— Zoe Heller

"This is a book which will give pleasure to everyone who reads it."
— Antonia Fraser

“Imagine Downton Abbey meets Oscar Wilde. Now read Daughter of Empire: Life as a Mountbatten by Pamela Hicks, one of the most intimate accounts of turbulent domestic life in the shadow of world-altering events. . . . Two beautiful people, many continents, World War II, lots of distractions, and even more name-dropping. . . . What’s not to love?”

"A glance at court life from the Mountbatten perspective. . . . Lady Pamela's portrait of her upbringing by two remarkable parents is affectionate and spirited."

“A uniquely intimate glimpse of the Queen few really know. In this captivating memoir, her cousin reveals a playful and surprisingly emotional woman.”