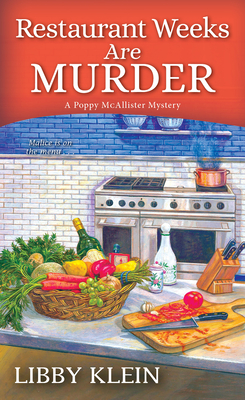 This is book number 3 in the A Poppy McAllister Mystery series.

Cape May, New Jersey, is the site of a big culinary competition—and the knives are out . . .

Poppy McAllister is happy about opening a Jersey Shore B&B—but working in a professional kitchen has always been her real dream. Now it’s coming true, at least briefly, as she teams up with her former fiancée, Tim—and his condescending partner, Gigi—during the high-profile Restaurant Week challenge. Poppy’s specialty is pastries, despite her devotion to a Paleo diet. But if anyone can make glorious gluten-free goodies, it’s Poppy.

Things get heated quickly—especially when some ingredients get switched and Tim’s accused of sabotage. Relatively harmless pranks soon escalate into real hazards, including an exploding deep fryer. And now one of the judges has died after taking a bite of Poppy’s cannoli—making her the chef suspect . . .