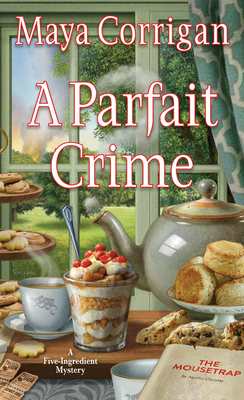 This is book number 9 in the A Five-Ingredient Mystery series.

In their Chesapeake Bay town, Val Deniston and her grandfather share a house, a love of the culinary arts—and a talent for catching killers . . .

At the site of a fatal blaze, Val’s boyfriend, a firefighter trainee, is shocked to learn the victim is known to him, a woman named Jane who belonged to the local Agatha Christie book club—and was rehearsing alongside Val’s grandfather for an upcoming Christie play being staged for charity. Just as shocking are the skeletal remains of a man found in the freezer. Who is he and who put him on ice?

After Val is chosen to replace Jane in the play, the cast gathers at their house to get to work—and enjoy Grandad’s five-ingredient parfaits—but all anyone can focus on is the bizarre real-life mystery. When it’s revealed that Jane’s death was due to something other than smoke inhalation, Val and Grandad try to retrace her final days. As they dig into her past life, their inquiry leads them to a fancy new spa in town—where they discover that Jane wasn’t the only one who had a skeleton in the cooler . . .

Maya Corrigan is the author of the Five-Ingredient Mystery Series, featuring a café manager and her kooky grandfather with five suspects, five clues, and five ingredient recipes in each installment. Corrigan lives near Washington, D.C., close to the setting for her series, Maryland's Eastern Shore. A winner of the Daphne du Maurier Award for Excellence in Mystery and Suspense, she has published essays on drama and short stories as well as taught courses in writing, detective fiction, and American literature at Georgetown University and NOVA community college. Please visit her online at MayaCorrigan.com.